The Rothman Disintegration
"The Vacation Solution" is the sixteenth episode of the fifth season of the American sitcom The Big Bang Theory. This episode first aired on Thursday, February 9, 2012.[1]

When Sheldon has to take a vacation, he ends up testing his relationship with Amy when he goes to work in her lab. Howard is being forced to sign a pre-nuptial agreement by Bernadette's father.

To get kids excited about science, Sheldon invents Physics Mad-Libs which are very funny to him since they sound ridiculous to a scientist, but as usual misses the point on how the rest of the world sees it. President Siebert comes by in a bad mood looking for Sheldon. Sheldon has to take his required vacation even though Sheldon doesn't see the need for them. Siebert tells him to take a trip and suggests Afghanistan.

The next day, Leonard enjoys the Sheldon-free ride to work where he can listen to music until he finds him hiding in the back seat almost causing an automobile accident. Sheldon wants to be snuck into the university to do work, but Leonard drives him right back home.

Penny and Amy gave Bernadette a hand with her wedding invitations. Penny was glad that they weren't in Klingon though Howard managed to get it printed on the back. Bernadette hopes her kinship|relatives think it's Hebrew. Her father is pressuring her to have Howard sign a prenuptial agreement since she makes more money than him. Amy had the same problem with her mother forcing her to shaving|shave her legs which she let her do last year. Penny tells her to break the news to him in bed. Bernadette doesn't want to manipulate him, but Penny chuckles that that is was sex is for. Talking about the wife's dowry in earlier times, Amy believes that cute Bernadette would easily go for two oxen and a goose while Penny would fetch a unicorn.

They try to come up with a vacation idea for the finicky Sheldon. Hawaii? A former leper colony built on a volcano where the disappointing ending to "Lost" was filmed. Florida? Sheldon once went there and got his hot dog taken by a seagull. Richard Feynman, a brilliant physicist who worked on the Manhattan Project, once took his vacation in a biology lab. Bingo, so does Amy.

In the hallway, Penny tells Leonard about Bernadette needing a pre-nup. Then Penny asks Leonard if he would sign one if she became a famous actress. Absolutely not. If he's at home with the child|kids while she's on location cheating on him with Ryan Gosling, Leonard gets paid.

Sheldon is excited to be working in Amy's lab, and Amy's glad to have her boyfriend with her since it's romantic. Amy thinks of it like Madame Curie and her husband working together under the glow of the radium that eventually killed her. Sheldon's first assignment is to clean some beakers for her which Sheldon thinks is beneath him. Amy explains that he has no experience in biology.

Leonard talks to Raj about breaking the news about the pre-nup to Howard. Howard is sort of cool with it. He has his Vespa, some vintage comics, and the double-plot at Mount Sinai Memorial Park Cemetery. The plot is next to the guy who played Mr. Roper on "Three's Company". Raj gasps, “Mr. Roper's dead?”

Sheldon cleans the beakers, only they have soap spots and has to do them over again. His next task of counting spores seemed much more up his alley though Amy makes him lose count. Finally he asks for a challenge and has to cut the hair-thin locus coeruleus from a brain sample, which he has no idea how to do. As his scalpel hand is trembling, he cuts his thumb instead and faints at seeing his blood. Amy remarks, “Sure, you're a biologist.”

Howard and Sheldon go to drown their sorrows at the Cheesecake Factory bar, which Penny is manning. Penny asks them what they're doing there in the middle of the day, which they claim they have no particular reason for. She informs them that the girls text her about pretty much everything that happens to them and, therefore, is completely aware of both their situations, and they quickly confess. She decides to set both of them straight. “All right, Howard Wolowitz. Listen up. You will sign anything she puts in front of you because you are the luckiest man alive. If you let her go, there is no way you'll find anyone else. Speaking on behalf of all women, it's not going to happen. We had a meeting.” Turning to Sheldon, “And you fainted at the sight of a little blood, ha ha!” Sheldon shows her his substantial wound and faints again.

Sheldon apologizes to Amy and still has to finish cleaning the beakers.

Howard decides he would talk to Bernadette's dad. Although she did warn him he was a retired police officer who still wore a gun and avoid topics like Jimmy Carter, gardeners, homosexuals, foreigners, Sean Penn, Vatican II, the designated hitter rule, organic food, or that he's Jewish. Then Howard changes his mind and that he'll call him from the International Space Station.

Sheldon: They tried to make Richard Feynman take a vacation, but he chose instead to expand his mind and learn something new. He went to work in his friend's biology lab. (aside to Howard) Richard Feynman was a famous American physicist — part of the Manhattan Project.
Howard: Everyone in the world of science knows who Richard Feynman was.
Sheldon: Now you do, too.

Howard: Isn't that just Feynman's idea?
Sheldon: Ten seconds ago you never heard of him - now you're an expert.

Raj: Mr. Roper is dead? You can't just spring that on a guy!

Sheldon: (Carrying a tray of beakers) Here you go! This is now the only lab with glassware washed by a man with two doctorates and a restraining order signed by Carl Sagan.
Amy: (Inspects a beaker) Soap spots! Wash 'em again.
Sheldon: You're being ridiculous! Those are perfectly clean.
Amy: (Picks up a large beaker) Sheldon, this beaker used to contain cerebral spinal fluid from an elephant that died of syphilis. If it's in fact perfectly clean, (holds it out to him) drink from it.
Sheldon: (Long pause, then takes back beaker and picks up tray again) Biologists are mean.

Sheldon: What do we start with? Slicing some genes? Clone a sheep? Perhaps grow a human ear on a mouse's back? Haha, I'm a freak! (laughs)

Amy: I'm excited to work with my boyfriend, it's gonna be romantic.
Sheldon: Way to kill the mood.

Amy: Are we nervous, Dr. Cooper?
Sheldon: No. What you see is a man trembling with confidence... Does the locus coeruleus usually bleed that much?
Amy: No, but your thumb does.
Sheldon: Oh dear! (faints)
Amy: Yeah, YOU'RE a biologist. (goes for first-aid kit on the wall)

Penny: Ha ha, you cut your thumb and fainted!

Sheldon: I have plenty of experience in biology. I bought a Tamagotchi in 1998... And.... it's still alive.

Sheldon: Excuse me, but you have Doctor Cooper in your lab! Are you gonna make him do the dishes? That's like asking The Incredible Hulk to open a pickle jar.

Penny: I’m so glad you talked Howard out of having your wedding invitations in Klingon.
Bernadette: Turn it over. I’m hoping my relatives think it’s Hebrew.
Amy: This is really happening. I’m gonna be a maid of honour. I’m gonna wear a beautiful dress and walk down that aisle and, finally, I will have my special day.
Bernadette: You mean my special day?
Amy: They’re gonna need an extra-large veil for somebody’s head.
Bernadette: If I ever actually ever get married.
Penny: Why wouldn’t you?
Bernadette: My dad. Because I make a lot more money than Howie, he’s putting a lot of pressure on me to get a pre-nup.
Penny: Ouch.
Bernadette: Yeah. Howie’s gonna freak out.
Amy: Parental pressure can be daunting. I remember the battle with my mother about shaving my legs. Last year, I finally gave in and let her do it.
Bernadette: I just don’t know how I’m gonna break it to him.
Penny: You know, I’m a big believer in breaking bad news to a guy when you’re in bed with him. That’s how I told my high school boyfriend I slept with his brother. That’s how I told his brother the same thing.
Bernadette: I don’t know, I don’t want to manipulate him with sex.
Penny: Oh, sweetie, that’s what sex is for.
Amy: You know, the connection between marriage and money is nothing new. In fact, the term wed referred to the money and livestock that the groom paid the bride’s father. For example, you’re adorable, intelligent and a good earner. I could conservatively see you going for at least two oxen and a goose. (To Penny) You would fetch a unicorn.

Leonard: What the hell are you doing?
Sheldon: Bleeding from my ears.
Leonard: What are you doing hiding back there?
Sheldon: I’m sneaking into work. Now, if the guard at the university asks what’s under the blanket, you tell him it’s some lobster traps.
Leonard: Lobster traps?
Sheldon: Yes. That’s how Velma and Scooby smuggled Shaggy into the old lighthouse.
Leonard: What are you going to do when you get to the university? People are going to recognize you.
Sheldon: Will they, Leonard? (Puts on cap and long-hair wig)
Leonard: Fine. Just get back under your blanket, and I’ll drive you there.
Sheldon: And no more singing.
Leonard: Fine.
Sheldon: I have GPS on my phone. I know you turned around.

Bernadette: Are you mad at me?
'Howard': No. I’m not mad at you. I just wish you would have come to me, so I didn’t have to hear it through the nerd-vine.
Bernadette: So, what are we gonna do?
Howard: You really want me to sign a pre-nup?
Bernadette: I don’t know. My dad’s pretty insistent on it, though.
Howard: Why don’t I talk to your dad, man-to-man?
Bernadette: Really? Oh, that’d be so great.
Howard: Done.
Bernadette: I should probably give you a heads-up about a couple of things. Even though he’s retired from the police force, he still carries his gun. But don’t worry, he won’t shoot it. It’s more of a fashion statement.
Howard: Okay.
Bernadette: And just to be safe, when you talk to him, don’t bring up Jimmy Carter, gardeners, foreign people, homosexuals, Sean Penn, Vatican II, gun control, organic food, the designated hitter rule, recycling or the fact that you’re Jewish.
Howard: Got it, got it. Will you e-mail me that list?
Bernadette: So the thing to watch for, if he’s shouting at you, you’re okay, but if he starts to get real quiet, leave as quickly as you can without making eye contact. Not in a straight line, throw some zigs and zigs in there.
Howard: You know, this isn’t that pressing. Why don’t I talk to him about it in May.
Bernadette: In May you’re gonna be on the International Space Station.
Howard: They’ve got a phone. 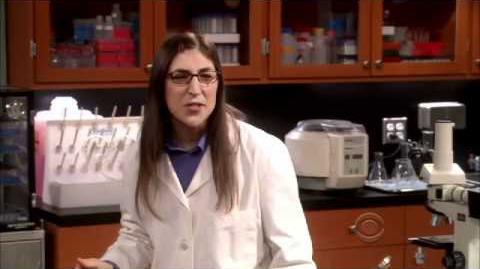 Retrieved from "https://bigbangtheory.fandom.com/wiki/The_Vacation_Solution?oldid=328854"
Community content is available under CC-BY-SA unless otherwise noted.