The Hawking Excitation
"The Transporter Malfunction" is the twentieth episode of the fifth season of the American sitcom The Big Bang Theory. This episode first aired on Thursday, March 29, 2012.[1]

Penny buys Sheldon and Leonard vintage collectible Star Trek transporter toys, but Sheldon accidentally breaks his when he tries to play with it. When he switches his with Leonard's, his conscience, in the form of his Spock action figure (voice of Leonard Nimoy), starts to get the better of him.

Penny and the gang are enjoying dinner as Sheldon observes that the best things in life are free, looking over at Penny. Howard needs to know from Raj if he is bringing someone to the wedding. Raj gets defensive and then becomes vague and evasive, all to cover for the fact that he has no one to bring along. Sheldon liked one wedding he went to that had a make-your-own-sundae bar. Howard and Bernadette aren't having one.

Apparently, Raj is desperate enough for a date where to ask his parents to send him a match. Since they have suspicions that he might be homosexual, they do ask him if he wants a female wife. His father thinks he is being smart asking for a matchmaker and that it's better than marrying for love. His wife points out that THEY married for love.

Penny decided to pay back Sheldon and Leonard for always eating at their apartment. She cashed a residual check from her hemorrhoid commercial and bought them gifts. Sheldon got a vintage 1975 Mego Star Trek Transporter with real transporter action. He got excited and gave her a finger gun keeping his hugs for extra special occasions. She went to the comic book store by herself and caused two guys to have asthma attacks which she said felt pretty good. Leonard got a Label label maker which was also "mint in box" as was the transporter. That was Penny's prank since she also got Leonard a transporter. Sheldon has a Mr. Spock figurine that will fit in. Penny wants to open them up so they can put in the Character (arts)|character and play with them. Both object because once you open the box, it loses its value. Penny's Mom said the same thing about her virginity, but she found it more fun when she took it out and played with it.

Raj brings Howard and Bernadette with him to chaperone his date; not unusual for first meetings in arranged marriages. Also since they're short, Raj will feel like he's six foot two. Lakshmi arrived and Raj is feeling good about it. ("I’m thinking double-wedding.")

While staring at his whiteboard Sheldon sighs that it's like looking at the universe naked. He hears a voice calling out to him. It's his Mr. Spock action-figure. He tells Sheldon that he should play with his transporter because the purpose of a toy is to be played with and to not play with it would be......illogical. First he has to wake up. Then he takes the transporter out and on his second use of it, the toy breaks. Sheldon freaks out and then exchanges it for Leonard's since he is never going to open his transporter.

Raj's dinner with Lakshmi went well that their having dinner in his apartment. Lakshmi is impressed with Raj and they check the number of messages from their parents who want to know how they are getting alone. Lakshmi also sets the record straight that she's a lesbian. She has heard plenty of rumors about him back in India. Between his lava cake, little soaps, perfume and his music knowledge, Raj has every indication that he is gay. Raj is not happy and neither is Lakshmi who wanted a phony-baloney husband her parents would have loved.

Sheldon now dreams he's on the planet Vulcan. ("Oh, dear. Two suns and no sunscreen.") Spock tells Sheldon he's ashamed of him for switching his transporter for Leonard's. Spock is supposed to have no emotions, but he points out that he comes from a factory in Taiwan. Sheldon gets angry and throws away the Mr. Spock figurine (Beam me up.) and then is attacked by a Gorn.

Raj confides in Howard that Lakshmi is a lesbian. Raj is contemplating going through with a fake marriage because he is lonely and to get their parents off their backs. Howard tells him that he shouldn't settle for someone who has slept with more women than him.

Sheldon tries to switch the boxes around, but can't bring himself to do it. Leonard and Penny return and Leonard decides to play with the transporter since it was a gift from Penny and will therefore never sell it. Leonard opens the package and finds it broken. First they think it's Stuart’s fault, but then Sheldon changes his story so much they know that he was involved. Several lies later, he explains about Spock coming to him in a dream and forcing him to open the box and the toy breaking. Then he was attacked by a Gorn. That explanation Leonard believes.

Bernadette and Howard come over, and they give Raj something to cuddle, a little puppy. Raj tells them that he is so cute and he’s going to see if the puppy fits in his man purse. Quietly Bernadette, who also figures that Raj may actually be closeted, whispers to Howard, "Metrosexual, my ass."

Sheldon: Quantum physics makes me so happy.
Leonard: Yeah, I'm glad.
Sheldon: It's like looking at the universe naked.

Sheldon: I thought where you come from they don't have emotions.
Spock: I come from a factory in Taiwan.

Penny: Ta-da!
Sheldon: (Gasps) A vintage, mint condition|mint-in-box, 1975, Mego Corporation|Mego Star Trek Transporter, with real transporter action. Hot darn!
Leonard: Where did you get that?
Penny: That's from Stuart at the comic book store.
Leonard: You went to the comic book store by yourself?
Penny: Yeah! It was fun. I walked in and two different guys got asthma attacks. Felt pretty good.
Sheldon: This calls for an expression of gratitude.
Penny: Ooh, am I about to get a rare Sheldon Cooper hug?
Sheldon: No, not this time, then it wouldn't be special. (makes a finger-gun gesture and clicks his tongue) Thanks, Penny!
Penny: You're welcome. (to Leonard) Don't worry, I didn't forget about you. Leonard, I got you... (takes something out from her shopping bag) a label maker!
Leonard: (looks stunned) Wow...oh, it's great. Also... in mint-in-box.
Penny: (takes something from her shopping bag) And I got you a transporter too!
Leonard: (throws away the label maker) Awesome!

Spock: Dr. Cooper! Dr. Cooper!
Sheldon: (looks around) Is someone there?
Spock: Down here, on your desk.
Sheldon: Spock?
Spock: I need to speak with you.
Sheldon: Fascinating! The only logical explanation is that, this is a dream.
Spock: It is not the only logical explanation. For example, you could be hallucinating after being hit on the head by say, a coconut.
Sheldon: Was I hit on the head by a coconut?
Spock: I'm not going to dignify that with a response. Now, to the matter at hand, you need to play with the transporter toy.
Sheldon: Yes, but its mint-in-box.
Spock: Yes, and to open it would destroy its value. But remember like me, you also have a human-half.
Sheldon: Well I'm not going to dignify that with a response.
Spock: Consider this. What is the purpose of a toy?
Sheldon: To be played with.
Spock: Therefore, to not play with it would be?
Sheldon: Illogical. Oh, dammit Spock you're right! I'll do it!
Spock: Sheldon, wait. You have to wake up first.
Sheldon: Oh, of course. Set phasers to dumb, right?

Penny: Oh my God, I love this chicken!
Sheldon: You know what they say; 'Best things in life are free'.

Penny: What is the truth?
Sheldon: My Mr. Spock doll came to me in a dream and forced me to open it. And when the toy broke I switched it for yours. Later he encouraged me to do the right thing and I defied him. And then I was attacked by a Gorn.
Leonard: Okay, that I believe.

Spock: Fine. I will just use the teleporter. Oh, right. You broke it.

Raj: This is a treat, what brings you guys by?
Bernadette: Raj, Howie told me what's going on with you and Lakshmi.
Raj: (to Howard) What, you told her?
Howard: I told everybody.
Bernadette: We believe there's someone out there who will love you for you.
Howard: Well actually, we kind of agreed to disagree on that one, but we both think you shouldn't marry this woman.
Raj: So, while I'm waiting for this mysterious perfect match, who may or may not exist, I'm supposed to just be alone?
Bernadette: Not necessarily. I think we've found someone for you to cuddle with. (Pulls a Yorkshire Terrier, Cinnamon, out of her purse)
Raj: (gasps) Oh my goodness! (holds the puppy) Aren't you the cutest little Yorkie ever? (turns to Howard and Bernadette) You got him for me?
Howard: Her. We thought you two would hit it off.
Raj: I think we already have. Thank you guys so much. (turns to the puppy) Let's go see if you fit in my man purse. (walks out of the room)
Bernadette: (to Howard) Metrosexual, my ass. 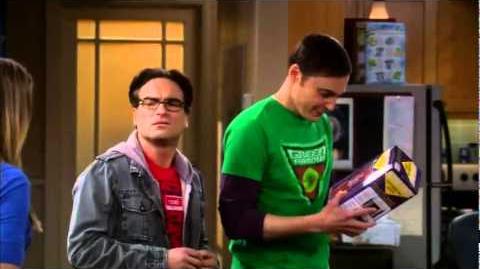 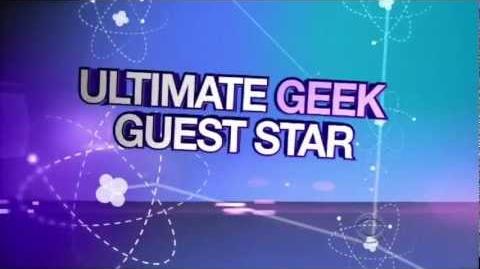 Retrieved from "https://bigbangtheory.fandom.com/wiki/The_Transporter_Malfunction?oldid=329286"
Community content is available under CC-BY-SA unless otherwise noted.