The Big Bang Theory Wiki
Register
Don't have an account?
Sign In
Advertisement
in: Episodes, Season 1, Time Traveling,
and 16 more

The Porkchop Indeterminacy
"The Nerdvana Annihilation" is the fourteenth episode of the first season of the American sitcom The Big Bang Theory. This episode first aired on Monday, April 28, 2008.

Leonard accidentally buys a full-size prop of the time machine from the movie "The Time Machine". As the guys attempt to bring it up to their apartment, they block the stairs and Penny ends up missing work. She scolds Leonard for having all these toys, so he tries to get rid of them all.

Sheldon is complaining that his sandwich was put together in the wrong order; the cheese isn't against the bread to create a moisture barrier against the lettuce, resulting in a sandwich that "may as well have been dragged through a car wash." Leonard calls their attention as he found a miniature time machine movie prop from the sci-fi film "The Time Machine" up for auction on the Internet. Leonard, believing that it would go for thousands, bids $800 because he simply wanted to be a part of it and later explains that he doesn't have $800 to blow on a miniature time machine. 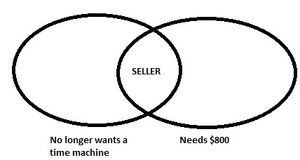 Howard explains that Leonard doesn't need to worry as expert online bidders do something called Sniping, which means they enter the winning bid at the last moment. But in the end, Leonard wins the auction. When he complains wondering who would sell a time machine for $800, Sheldon solves the query by answering that it would be someone at the intersection of "no longer wants a time machine" and "needs $800". Since Leonard doesn't have the money, all four of them place $200 and share it.

When the machine arrives, it is not a "miniature" as Leonard had assumed, but the actual full blown life-size prop. In the lobby, the boys face the dilemma of how to get the massive machine up to the apartment. Discussion ensues about the still broken elevator, and Sheldon ponders whether they should report the elevator issue to management.

They end up using a manual labor approach, dragging and pushing it up the three flights of stairs. Doing so blocks the stairwell, and as Penny tries to leave for work, she's unable to get past the machine blocking the entire stairwell. Sheldon suggests that she go to the roof and jump over to the adjacent building to take their stairs down, which she does. Admiring their conquest, Sheldon ponders on the timeless struggle between the typologies of the Eloi versus Morlocks, while Howard is thrilled about it's potential as a "chick magnet."  Rules are set, including "pants must be worn at all times in the time machine" (directed specifically at Howard).

Leonard takes the first turn, planning to go back and see Alexander Graham Bell invent the telephone. Others want to see that too, but Sheldon is concerned that it'll get crowded in Bell's lab, so he suggests that Leonard first go into the future to obtain a cloaking device. They pretend to play this out. Their joy is interrupted by Penny who tells the boys about the injuries and problems she encountered due to roof hopping because of their exploits with the time machine which caused her to miss her shift and lose a day's pay. Penny lambasts them about their "stupid toys and costumes," and particularly the time machine, which looks like "something Elton John would drive through the Everglades". She calls them all pathetic and storms out.

That night, Leonard is upset about Penny's impression of him and he regrets getting it; noting that "girls like Penny never end up with guys who own time machines." Leonard imagines going back in time and taking Penny down the elevator shaft like a superhero, then begins packing up his collectibles, determined to sell them and "grow up," as Penny suggested. The other guys start putting dibs on Leonard's stuff, but Leonard has made a deal with Larry at the comic book store for his whole collection.

As Leonard leaves to go dispose of his collectibles, the others try to stop him. Leonard threatens to open a rare Geordi LaForge action figure without his visor, if they don't let him go.

Penny appears, and Sheldon chastises her, noting that while she ripped into Leonard about his "toys", that Penny herself has stuffed animals, Beanie Babies, My Little Ponies, and is wearing Hello Kitty shorts. Penny relents and apologizes, admitting that the things he loves make him who he is. Leonard is prepared to go ahead with disposing of his collectibles, when Penny's friend Mike shows up, and follows Penny into her apartment to "help her change clothes." Leonard comes to his senses, picks up his collectibles, and runs into his apartment, claiming "my turn in the time machine".

Later Sheldon dreams he sits in the time machine, ending up in April 28, 802,701, feels amazing it worked, but then he's being attacked by Morlocks. On awakening, he agrees with Leonard that perhaps they should dispose of the time machine. Leonard hires guys to move it out which are Morlocks attacking Sheldon again, turning out to be a dream in a dream. When he awakes for real, he shouts LEONARD!!!

Sheldon: This sandwich is an unmitigated disaster. I asked for turkey and roast beef with lettuce and Swiss on whole wheat.
Raj: What did they give you?
Sheldon: Turkey and roast beef with Swiss and lettuce on whole wheat.
Raj & Howard: (staring at Sheldon, confused)
Sheldon: It's the right ingredients but in the wrong order! In a proper sandwich the cheese is adjacent to the bread to create a moisture barrier against the lettuce. They might as well have dragged this thing through a car wash.

(Upset by Penny's comments, Leonard sits in the time machine)
Sheldon: Leonard, it's two in the morning.
Leonard: So?
Sheldon: So, it's my turn.

Leonard: What if I knock you unconscious right now?
Sheldon: It won't change the past.
Leonard: But it'll make the present so much nicer.

(Leonard has just played with the time machine)
Leonard: That was fun! (Others laugh with excitement.)
Raj: My turn!
(Penny opens the door to the apartment and she is so totally upset with the guys.)
Penny: (she tells the guys off) OK! First of all, (she points to Sheldon) what you call a gap, was nearly 3 feet wide; I slipped and skinned my knee.
Leonard: Are you OK?
Penny: (she shushes Leonard angrily) Azzzzzz! (she now shouts at Leonard) Second of all, the door to the stairway of the other building was locked, so I had to go down the fire-escape which ended on the third floor, forcing me to crawl through the window of a lovely Armenian family, who insisted I stay for lunch.
Leonard: That doesn't sound too bad?
Penny: (now sounding uncomfortable with the experience) It was eight courses of lamb and they tried to fix me up with their son.
Leonard: Sorry.
Penny: Not Done! By the time I finally got to work; they'd given my shift away. Yeah, that's right, I lost an entire day's pay thanks to this, this...
Sheldon: Time Machine.
(Penny stares angrily at Sheldon, giving him a glare of fury)
Leonard: The lights flash and the dish spins, you wanna try it?
Penny: (she squeals with rage) No! I don't wanna try it; my God, you are grown men! How can you waste your lives with these stupid toys and costumes and comic books?! And now that! That...
Sheldon: Again, Time Machine.
Penny: (she is now even more angry) Oh. Please! It's not a time machine, if anything; it looks like something that Elton John would drive through the Everglades.
Sheldon: It only moves in time. It would be worse than useless in a swamp.
Penny: (she's had enough) Pathetic! ALL OF YOU! Completely pathetic! (Penny leaves, and the guys are in silence)
Raj: My turn! (Leonard stands there while the others continue to play.)

(Sheldon, Raj and Howard are trying to stop Leonard from selling his stuff. Penny comes outside in her pajamas to see what the fuss is about.)
Penny: What the hell's going on?
Sheldon (points to Penny with a plastic toy of Glamdring, Gandalf's sword): You hypocrite!
Penny: What?
Sheldon: Little Miss "Grown-Ups Don't Play With Toys"! If I went into that apartment right now, would I not find Beanie Babies? Are you not an accumulator of Care Bears and My Little Ponies? And who is that Japanese feline frolicking on your shorts? Hello, Hello Kitty!
Penny (to Leonard): OK, OK, Look, if this is about yesterday, Leonard, I am really sorry about what I said, I was just upset.
Leonard: No, I needed to hear it.
Penny: No you didn't, look, you are a great guy, and it is the things you love that make you who you are.
Howard (To Raj): I guess that makes me large breasts.

(The time machine arrives to the guys in which they find out it is life-size and not miniature.)
Leonard: How on earth are we gonna get it upstairs?
Howard: We could just take the dish off and put it in the elevator.
Leonard: Yes, but the elevator's been broken for two years.
Sheldon: I've been meaning to ask you. Do you think we should make a call about that?
Howard: Not necessary. I have a Master's in Engineering. I remotely repair satellites on a regular basis. I troubleshoot space shuttle payloads. When the Mars Rover started pulling to the left, I performed a front-end alignment from 62 million miles away. (Pushes the button of the broken elevator and then listens to see if it comes down.) No, that baby's broken.

Sheldon: (upon arriving in 802'701 in the time machine) It worked. It really worked. They said I was mad, but it worked.

1/15
Community content is available under CC-BY-SA unless otherwise noted.
Advertisement