View source
watch 01:23
Wiki Targeted (Entertainment)
Do you like this video?
Play Sound

The Inspiration Deprivation
"The Laureate Accumulation"[1] is the eighteenth episode of the twelfth season of the American sitcom The Big Bang Theory. The episode aired on Thursday, April 4, 2019.

When their competitors Pemberton and Campbell charm America on a publicity tour, Sheldon and Amy try to bring Nobel laureates Kip Thorne, George Smoot and Frances H. Arnold to their side. Also, Halley's fear of the dark leads to opportunity and conflict for Howard, Bernadette and Stuart.[2]

Everyone is in Leonard and Penny's apartment having dinner and watching the two FermiLab scientists on Ellen talking about discovering Sheldon and Amy’s asymmetry string theory. Sheldon wants Ellen to expose them as the frauds they are. Pemberton and Campbell can’t explain the theory to the audience, but they do charm them and sing one of their popular YouTube videos. “Let's Get Physical|Let’s Get Physicist!”

Sheldon visits the two frauds at their hotel room. Sheldon accuses them of being charming which they thank him for. He wants them to call a press conference to tell everybody that they blindly stumbled into proving the theory that Sheldon and Amy discovered. Nope. Campbell says that just because they stumbled into it doesn't mean that they didn't discover it. As their argument develops into an argument about Pemberton's ex-wife, they close their door on Sheldon.

In the cafeteria, Sheldon is complaining about Campbell and Pemberton's celebrity bus tour. President Siebert stops in and tells Sheldon not to worry since Caltech is putting together a reception of other Nobel Prize winners to gain some scientific support for Sheldon and Amy to oppose to the frauds' popular support. 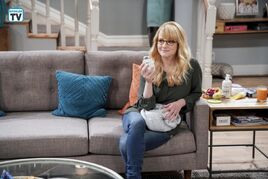 At their house, Howard returns finding that Bernadette can't get the children asleep. Halley is afraid of the dark, while Neil would sleep with the nightlight on. Bernadette doesn't know why she is afraid so suddenly. Howard reminds her that she is his daughter. He goes upstairs to talk to her. Over the baby monitor, Bernadette hears how he tells Halley how he was afraid while he was in outer space.

In Apartment 4B, Amy tells Sheldon about all the Nobel Prize winners the university is inviting. Unfortunately Sheldon has a history of insulting his colleagues. Amy wonders if anyone is left that might help them.

Stuart finds Bernadette busy making drawings for a book about astronaut Howard overcoming his fears. Stuart thinks that Halley made the drawings instead of Bernadette. She wants to make it into a book for Halley and Neil. Stuart offers to do the illustrations. Bernadette thinks that that is great. According to Stuart doing a children's book would be a nice change from what he usually draws. He doesn't clarify his comment.

Sheldon and Amy visit the Hofstadters, asking them if they have any cookie dough. They do. They want to bake cookies for the other scientists to get their support. Leonard thinks that they'll know that Sheldon is bribing them. Sheldon disagrees because a lot of brilliant people are pretty oblivious to social cues. Penny sarcastically thanks Sheldon for pointing that out.

Professor Smoot throws out Sheldon's cookies, as does Professor Thorne. Professor Arnold seems to appreciate the gift until she finds out that they are oatmeal cookies. Saul Perlmutter sent Sheldon a dirty message with his cookies.

Later, Bernadette brings Howard a present, the completed story of “The Frightened Little Astronaut.” Stuart even knows a publisher who is interested in their book. Howard is not happy with the world knowing his story. Raj snidely suggests calling it "the bitchy little astronaut".

Talking things over with Sheldon, he really feels bad for Amy since she is suffering for his mistakes. Leonard is impressed that Sheldon is worried about someone else's feelings. He has ever since he laughed at Amy after she got shocked by the Christmas tree lights. Sheldon wishes he had a time machine to correct all his social blunders. Leonard is willing to help him when he crosses the line. Sheldon figures on coming up with a code word; while Leonard will just tell him to “Shut up.”

Penny meets Amy in the laundry room. She learns that no one is coming to their reception. Amy describes the scientific reasons that he didn't like Professor Smoot's work. “Damn!” replies Penny.

At the Wolowitzes, Stuart finds Howard knowing that he doesn't want his story published. He tells Howard that it could be great for his art career. Maybe Howard would do it if they made some changes like remove “frightened little” from the title, remove where he is crying and maybe make him a superhero.

Leonard and Penny visit Professor Thorne, who doesn't want to help Sheldon. Penny tells him that Dr. Fowler is really nice that mentions his work on gravitation waves. Throne asks Penny if she knows about his work, but she had just checked her phone for some facts about it. Leonard suggests that it is about the work and not the individual, while Penny gets excited that he was a consultant on the movie Interstellar.

Bernadette looks over Howard's changes with him looking like a body builder. Bernadette comments that at least the other story was real and that in the end the little astronaut was brave. Howard doesn't want to keep reliving how mean they were to him in the space station. Then Bernadette says that she gets it though it would take a real brave man to publish a story like that to help poor frightened children. Howard wonders due to her guilt trip if his wife was really Jewish.

At the reception, Amy thanks her friends for convincing the scientists to come. Speaking to President Siebert and Professor Arnold, she thinks that the couple coming up with super-asymmetry at their wedding was a great story. Next Pemberton and Campbell show up. To catch them, Sheldon and Amy propose a complicated argument about super-asymmetry to them where Campbell merely says that he agrees with Sheldon. Then Pemberton thanks Sheldon that they could not have done it without him. Sheldon tries to get everyone to hear that until Leonard tells him to "shut up". Pemberton then comments that they are getting all these accolades while some people make them feel like they are imposters. Amy then blows up and rants at Pemberton and Campbell that they are indeed impostors and frauds and that she and Sheldon are suffering from “impostor syndrome”.

Finally Howard is reading the book to Halley where he is afraid while going up to the space station. The astronaut had a secret and when an alien broke into his spaceship he destroyed it. Bernadette corrects him to which Howard tells his daughter that it was really his bossy wife. That will be a story for another day.

Ellen: So you guys have discovered something pretty amazing in the universe. Obviously I understand high-level physics because I’m a comedian, but…can you explain it to the audience?
Pemberton: Well I don’t know, I’m not sure we’re even smart enough to understand it.

President Siebert: Look it doesn’t matter if they have popular support, we’re gonna get the scientific community behind us.
Leonard: That’s right, the Nobel Prize is about the work, as your fellow scientists we support you and Amy.
President Siebert: That’s great Scooby gang.

Bernadette: And the best part is Stuart showed it to a publisher friend of his and their interested in it.
Raj: That’s so cool.
Howard: No. Absolutely not.
Bernadette: Why?
Howard: Because I don’t want the whole world to know I was the frightened little astronaut!
Raj: Maybe you should have called it The Bitchy Little Astronaut.

Penny: Hey, you worked on the movie “Interstellar”?? [Thorne nods.]

Howard: Wow that was quite a guilt trip. Are you sure you’re not Jewish?

Pemberton: You know, it’s strange. A few months ago nobody paid attention to us and now all of a sudden we’re getting all of these accolades.
Campbell: Yeah, have any of you ever felt like you didn’t deserve it.
Sheldon: Leonard there is something I need to say.
Leonard: Shut up.
Sheldon: Okay.
Pemberton: It’s crazy. We conclusively proved super-asymmetry and yet somehow we still feel like imposters.
Campbell: There should be a term for that.
Amy: Oh, for crying out loud! There is a term for that! It’s called “imposter’s syndrome” and you don’t have it! Because you can’t have it, because you are imposters and you are! We’re the ones who discovered super-asymmetry! So if anyone is going to feel like they have imposter’s syndrome it’s us, because we are not imposters, they are!! YOU'RE IMPOSTERS, AND YOU'RE FRAUDS!!!
Sheldon: (to Leonard) Is that what I would’ve sounded like?
Leonard: Yeah.
Sheldon: Yikes!

Leonard: Professor Thorne.
Professor Thorne: Dr. Hofstadter.
Leonard: Uh, you know my wife Penny.
Penny: Hi.
Leonard: Uh, we wanted to talk to you about Dr. Cooper. Now before you say no…
Professor Thorne: No.
Leonard: Well, then after you say no…
Professor Thorne: No.
Penny: Okay, look, Sheldon a paint in the ass… but Dr. Fowler is really nice. So if you average them out…math…you’ve got someone who’s really okay.
Leonard: But more than the person, the Nobel is about the work. You should understand that more than anybody.
Penny: Yes, because of your work on gravitational waves.
Professor Thorne: You know my work?
Penny: I do, I’m really hogging the conversation. Leonard?
Leonard: Just give them a chance. Science has a history of difficult people. Look at Newton who was a jerk to Leibniz, and Leibniz who was a jerk to everyone.
Penny: Yeah, and you know, I don’t need to tell you that gravitational waves are disturbances in the curvature of space-time. And that the… Hey, you worked on the movie “Interstellar”?

1/87
Español
Community content is available under CC-BY-SA unless otherwise noted.