The Friendship Algorithm
"The Killer Robot Instability" is the twelfth episode of the second season of the American sitcom The Big Bang Theory. This episode first aired on Monday, January 12, 2009.

When the guys have an entry into the killer robot contest, Howard makes the mistake of pushing Penny one too many times with his creepy ways and he is subject to her anger.

The gang of geeks has built a killer robot to enter into the Southern California Robot Fighting League Round-Robin Invitational named MONTE, aka. Mobile Omnidirectional Neutralization & Termination Eradicator. Their entry, mainly designed by engineer Howard, has a razor-sharp circular saw, one polycarbonate grinding and flipping wheel, steel armor-plated exoskeleton top and bottom and a 110-horsepower that can go from zero to "holy crap" in 4.8 seconds. The robot destroys the toaster oven.

Next, as Penny is coming up the stairs talking on her phone, MONTE crashes through their apartment door into the hallway, causing Penny to run away screaming. The guys are cleaning up their killer robot as Penny comes in and tells them that their thing tried to kill her. Sheldon denies this fact and insists that if that was MONTE's intent, she would be dead now. The robot fighting competition is explained to Penny as Howard invites her to the post-competition dance. He casually remarks that the guys would love to see a girl there. Penny wonders how it could be a dance since she'd be the only girl there. Howard describes her as the only “doable” girl to which Penny calls him a pig. Leonard tells Howard to back off, while he continues dancing "their tango". Penny gets madder as she calls him “pathetic and creepy”. Howard is shocked that she is not flirting with him. Penny, sick and tired of Howard's antic, finally explodes with “No woman is ever going to flirt with you! You're just going to grow old and die alone!" Howard then leaves, shocked and crushed. Penny's actions shock all of the guys into silence, even Sheldon. Raj thinks that Penny would make a good entry as a killer robot herself.

A depressed Howard stays at home in his bed. Leonard calls him and hears Howard fighting with his mother about not going to school. His engineering expertise is very missed because their colleague Barry Kripke challenges them to fight his robot, the Kwipke Kwippler, in a grudge match at the university. Sheldon engages him in trash talk that as usual is too convoluted to make any impact. Leonard wants to decline because Howard is absent. Kripke refuses that excuse, as everybody there is pathetic, creepy, and can't get girls. Leonard tries to get Penny to apologize to Howard; however, Penny has no intention of apologizing, stating that it had to be done. Howard has been in bed for two days, he tells her. Penny still has absolutely no sympathy. Leonard reminds her that she has an overexposed-to-gamma-ray thing going on. Penny doesn't get the Bruce Banner Hulk reference. Out of options, Leonard invokes the favor she promised after Leonard and Sheldon tried to get Penny's television back from her ex-boyfriend in the show's Pilot episode. First she pleads with him not to ask for that, but then Leonard reminds her emphatically that they came back without their pants. She reluctantly agrees to go talk to Howard the next day. Leonard begins to warn her about Howard's mother, but decides not to.

At Howard's house, Penny is announced by his mother as Patsy. Howard doesn't want to see her, but she slips passed his mother anyway. Choosing her words carefully, she tells Howard that she has been informed that he does have feelings, that she hurt them and apologizes for that. Howard stands up to her and tells Penny that she did not traumatize him, so Penny says goodbye and leaves. In the hallway, she hears Howard breaking down. Feeling guilty, she returns to comfort him.

At the university, the Kwipke Kwippler destroys a Chevy Cavalier. Leonard and Raj want to forfeit the match, but Sheldon refuses to quit since they have been running away from bullies all their lives. Sheldon wants to get MONTE ready; however, he doesn't know how to open the box.

Penny is cuddling with Howard who is telling her about every girl he had a crush on including Marcy Grossman who had the hottest overbite, once the braces came off. In a talent show he sang a song to her, "My Girl" using her name in the lyrics. Afterwards, she approached him and spit in his hair. Penny stops him and wonders if he tries too hard. She tells him that she thinks he is smart, funny, and has a cool job. Penny admits that underneath all his swagger, that he really is a nice guy. Howard asks her if she really thinks that and Penny confirms it. Then, Howard tries to kiss her and Penny punches him in the nose.

In the lab, Leonard is impressed with Kripke's robot. His spinning blade is rotating at 3400 RPM. Sheldon has the controls and wants to have revenge against all those bullies until their opponent lights up his flame thrower. Sheldon finally loses his nerve and MONTE leaves the lab (smashing the door down in the process) and is chased down the hallway by Kripke and his killer robot.

Back at the apartment, MONTE is a hopeless burnt wreck which Sheldon takes full responsibility for. Howard arrives with a bruised and bandaged face. Penny explains that he slipped and fell in the bathtub and that Howard now knows "what bathtubs are capable of doing when you don't treat them with respect." Howard agrees, saying "Yeah. They sucker punch you when your eyes are closed." Sheldon asks Howard if he can repair MONTE. Howard first sarcastically says that he can fix it with electrical tape and solder, and then adds that he has seen space probes that have returned from space and crashed into the desert in better shape. Sheldon again apologizes and that they will bury MONTE in the morning. Penny remarks that he is getting a little carried away since it was just a toy robot. This upsets Sheldon as he runs off to his room. Penny leaves to console him, while Howard is not all that unhappy since he feels that he is halfway to pity sex with Penny.

On the whiteboard to the right of the closet, behind the DNA tower, is the Bekenstein-Hawking formula for creating black holes.

There are lots of new items/props in this episode. In the living room of the apartment, we see:

When Penny visits Howard, we see in Howard's bedroom:

Mrs. Wolowitz: SHE RAN PAST ME! WAS I SUPPOSED TO TACKLE HER?!

Leonard: Forget the robot; what happened to you?
Penny: He slipped and fell.
Howard: Yes, I slipped and fell. In the bathroom. Bounced right off the tub.
Penny: Yes, now he knows what bathtubs are capable of doing when you don’t treat them with respect.

Howard: Once again, Penny and I have begun our little tango. The carnal repartee, the erotic to and 'fro. But as delicious as the appetizer might be, at some point we will HAVE to succumb and eat the entree while it's still (demonstrates a sizzle) hot!
Penny: Normally, I can just ignore you. I get it, you're a little peculiar. Like Sheldon...
Sheldon: Excuse me, Penny. But in this room, you're the one who's a little peculiar.
Penny: (to Sheldon) You may be right. (to Howard) But back to you. I know you think you're just some smooth-talking ladies' man, but the truth is you are just pathetic and creepy.
Howard: So...what are you saying?
Penny: I am saying it is not a compliment to call me do-able. It is not sexy to stare at my ass and say "Oooh, it must be jelly 'cause jam don't shake like that." And most of all, we are NOT dancing a tango, we're NOT to-ing and fro-ing, nothing's going to happen between us! EVER!
Howard: Wait a minute. This isn't flirting, you're serious.
Penny: (she's now at her last straw with him) Flirting? You think I'm flirting with you?!? I am not flirting with you! No woman is ever going to flirt with you! You're just going to grow old and die alone! 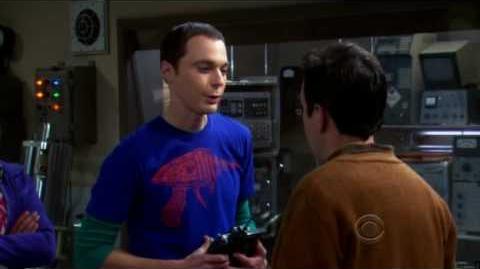