The Big Bang Theory Wiki
Register
Don't have an account?
Sign In
Advertisement
in: Episodes, Season 5, Episodes with musical numbers,
and 16 more
English

The Ornithophobia Diffusion
"The Isolation Permutation" is the eighth episode of the fifth season of the American sitcom The Big Bang Theory. This episode first aired on Thursday, November 3, 2011.[1]

Amy is hurt when Bernadette and Penny go bridesmaid dress shopping without her, so she turns to a reluctant Sheldon for comfort.

Amy, Penny, and Bernadette are excitedly discussing dresses for Howard and Bernadette's wedding. Amy reveals that her cousin Irene and her entire wedding party had died in a carbon monoxide accident, so they could get all the unused dresses for free; however, this is quickly rejected by the horrified gang. Sheldon gets fed up with the quality of conversation, unsuccessfully trying to be discreet in his blaming Penny for it, and attempts to discuss the validity of a Swiss discovery concerning faster-than-light particles at CERN, after which the three women leave for Penny's apartment.

The next day, Amy is in the Caltech cafeteria after being given a grant to purchase a strain of Mad Cow Disease, making everyone uncomfortable; however, Howard absent-mindedly complains at constantly being texted non-stop by Bernadette with pictures of the dresses they want to buy. This revelation makes Amy realize they are doing it without her, and she leaves, looking visibly upset.

Later at apartment 4A, Leonard is playing Champion Jockey: G1 Jockey & Gallop RacerXbox Kinect horse racing, but Sheldon becomes concerned when Amy doesn't respond to any of his attempts to contact her, and Leonard offers to drive him there to find out what's going on. When they arrive, she is playing "Everybody Hurts" on her harp, while crying, and Sheldon, unwilling to proceed, attempts to persuade Leonard to take him home. Leonard sees an opportunity and immediately knocks on Amy's door using Sheldon's triple knock, and leaves, stranding Sheldon at Amy's apartment. He says that he doesn't have to put up with this problem because he is single. Amy initially desires to be left alone, but she invites him in and explains that Penny and Bernadette's snubbing her has left her feeling depressed. After asking him to keep an open mind, she explains her desire for physical contact, and makes a list of proposals involving them getting intimate, while Sheldon makes a series of counter-proposals (French kissing) that involve less intimacy (patting her and neck massage), but will still be soothing to her. They eventually agree to just cuddle, and she snuggles up to him on her couch.

The next morning, Sheldon storms into the cafeteria completely furious, and confronts Howard and Leonard, demanding that they get their women in line. Howard and Leonard are confused. Sheldon explains that his night of building a Lego Death Star had been ruined by his having to spoon with Amy, and demands they get Penny and Bernadette in line and apologize to Amy. Leonard, confused, asks why he has to talk to Penny, since she is no longer his girlfriend; however, Sheldon does not care, citing that this is his fault due to him inviting Penny to lunch when they first met her. He then storms out in a rage.

That evening, after Howard and Leonard explain what happened, Penny and Bernadette are dismayed, and explain they had gone without Amy because she was over-enthusiastic and would've been a hindrance to their dress shopping, such as how she talked about various cultural wedding preparations such as getting naked and washing each other. Raj looks interested, getting weird stares from everyone else. Penny is curious how Amy found out. Howard tried to frame Raj, but confesses to accidentally mentioning the photo Bernadette sent him. They never-the-less feel guilty, and visit Amy at her laboratory to apologize; however, their efforts to do so are merely brushed off by Amy, who describes herself as a "tumor" in an otherwise functional brain. Penny is so sickened by looking at the dissected brain on Amy's table that she vomits into the waste basket.

That night, Sheldon gets a call from Amy, who has gotten drunk in a liquor store parking lot, and he and Leonard rush over to help her. She once again attempts to persuade Sheldon to have sex with her at a nearby motel, and embarrasses him by calling him "cuddles". Leonard is actually curious about what it would take for Sheldon to have sex with Amy. Sheldon instead insists that he and Leonard take her home, and Leonard helps her up, finding Amy's "baseball metaphors for second base". The next day, Penny and Bernadette return to Amy's laboratory, and Bernadette, in an effort to apologize to her once and for all, asks her to be her Maid of Honor. Amy is immediately excited and forgives them at once.

The episode ends with Amy filming a dress shopping trip with Penny and Bernadette as part of the pre-wedding events. She is as over-enthusiastic as they had feared. She agrees that Bernadette is beautiful in a wedding dress, but not "Penny beautiful", which annoys them. Penny is taking a long time to dress so Amy barges into Penny's dressing room with her camera while she's in her underwear. Penny yells at her to get which Amy does but not without taking a second quick look as she leaves.

Amy: Wait for moi!
Sheldon: Wha.. you're leaving?
Amy: Sheldon, sometimes you forget, I'm a lady. And with that comes an estrogen-fueled need to page through thick, glossy magazines that make me hate my body.

Sheldon: Stand back! While I turn this conversation into a conver-sensation.
Leonard: How long will it take for Mad Cow disease to kill me?
Amy: Four, five years.
Leonard: No, that's not gonna do it.

Leonard: I would have been a great jockey had I not been too tall.

Sheldon: Leonard, in your own simple way, you may be the wisest of us all.

Amy: I was hoping you wouldn't notice. Irene was always a slave to a good bargain, and sadly as it turned out, space heaters.

Sheldon: Would you like to talk about it? And keep in mind that 'no' is a perfectly viable answer.

Amy: Oh, look. It’s Sheldon and little Leonard. Hi, little Leonard.
Leonard: Hi, Amy.
Amy: (to Sheldon) Hey, Cuddles.
Leonard: "Cuddles"?
Sheldon: Yes, "Cuddles". We cuddled. Grow up, Leonard.
Leonard: Amy, what are you doing here?
Amy: Well, I came here to get a bottle of wine like Penny taught me to do when you're sad.
Leonard: Yeah, but why didn't you go back to your apartment?
Amy: Didn't you go to high school, Leonard? Parking lots are where all the cool kids hang out. Not that the rat bastards ever invited me.
Leonard: Maybe we should get you home.
Amy: Oh, hang on, hang on, hang on. Sheldon, what would it take for you to go into that liquor store, buy a bottle of hooch, take me across the street to that motel, and have your way with me?
Leonard: Yeah, Sheldon, what would it take?
Sheldon: I'm begging both of you, please, let's go.
Leonard: Okay. Come on. Upsy-daisy.
Amy: Whee! Ooh, finally someone found second base.

Amy: Sheldon, I’m going to ask you something, and I’d like you to keep an open mind.
Sheldon: Always.
Amy: At this moment, I find myself craving human intimacy and physical contact.
Sheldon: Oh, boy. You know ours is a relationship of the mind.
Amy: Proposal: one wild night of torrid lovemaking that soothes my soul and inflames my loins.
Sheldon: Counter proposal: I will gently stroke your head and repeat, "aw, who's a good Amy?"
Amy: How about this? French kissing, seven minutes in heaven culminating in second base.
Sheldon: Neck massage, then you get me that beverage.
Amy: We cuddle. Final offer.
Sheldon: Very well. Oh, boy. (they cuddle awkwardly)
Amy: I’m just saying, second base is right there.

Amy: This is us. Bernadette, you are the analytical, scientific left hemisphere. Penny, you’re the creative, spontaneous right hemisphere. And where’s Amy? She’s right here, the sad little tumor no one wants to go dress shopping with. 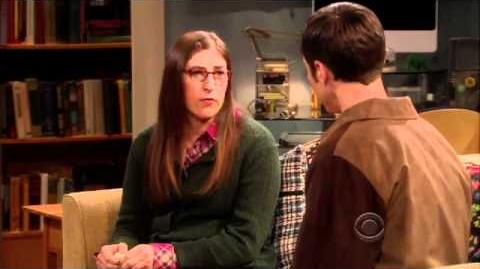