The Big Bang Theory Wiki
Register
Don't have an account?
Sign In
Advertisement
in: Episodes, Season 2, Articles With Videos,
and 11 more
English

The Financial Permeability
"The Friendship Algorithm" is the thirteenth episode of the second season of the American sitcom The Big Bang Theory. This episode first aired on Monday, January 19, 2009.

Sheldon wants access to a university computer which Kripke controls, so Sheldon decides to become friends with his adversary. He even invents an algorithm for making friends.

At the Caltech cafeteria, Sheldon is going on and on about how deadly tapioca pudding is. Howard interrupts him until Sheldon is about to explode and they let him finish in a quick and detailed rant full of unwanted factoids. Barry Kripke comes over to "congwatuwate Weonard" on anti-proton decay experiment, which had 20,000 data runs without any statistically significant results. Sheldon needs time on the open science grid computer, which Barry Kripke controls, and let his friends have plenty of time on it. Sheldon decides that he should become his friend.

Back at home, Leonard is working on Penny’s computer so that Howard's emails go right into the spam folder. Sheldon is calling Kripke to again try and be friends after many unanswered phone calls. Leonard is Sheldon's friend because there was a flyer on the bulletin board at the university: "roommate wanted: whistlers need not apply." Leonard demonstrates with a short whistler, which is immediately met with a quick first warning from Sheldon.

Sheldon is undaunted by his quest for figuring out how to make friends so he passes out a questionaire to his friends, 211 questions and an essay. No one takes it seriously. Leonard answered the multiple-choice in a repeating pattern. Howard filled out his essay with a picture of a raccoon with an enlarged scrotum.

Next Sheldon decides to head to a bookstore to find literature on the subject. In the children's section he finds "Stu the Cockatoo is New at the Zoo." He tries to make friends with a little girl who also likes monkeys. He invites her to go with him sometime to see the monkeys; however, Leonard pulls him out before he gets arrested as a stalking pedophile.

Of course, Sheldon learns about rock climbing over the Internet and has no fear of climbing. He does have fear of falling. He freezes and can’t go up or down so he faints still hanging from his safety line like a giant bird.

Back at the apartment returning from their rock-climbing adventure, they offer Kripke some Chinese food. He needs some dental floss first. Since he can’t deal with any more friends, Sheldon cuts Raj loose even though Penny is not a scientist. Kripke notices that Penny is hot, but changes her name to Roxane. Howard whispers that he is starting to look good now, isn’t he? Sheldon pushes past to discuss getting time in the Open Science Grid Computer; however, since as the official schedule is out of his control, Kripke can’t help him even if they are friends. Raj is now back in his friendship circle since he likes monkeys. And Sheldon goes back to the rock-climbing wall and gets much further this time before passing out again.

Penny: What about Howard and Raj, how did Sheldon become friends with them?
Leonard: I don't know...how do carbon atoms form a benzene ring? Proximity and valence electrons.
Penny: Well, yeah, sure, when you put it that way.

Sheldon (on phone): Hello. This is Sheldon Cooper. I’m leaving a message for Barry Kripke. Barry, it was pleasant seeing you today in the cafeteria. I saw that you purchased the chef’s salad. Apparently, you did not know that the chef’s salad is kitchen trickery, to utilize scrap meat. Nevertheless, I hope you enjoyed it. I’m following up on our pending friendship, and I look forward to hearing from you regarding its status. Sheldon Cooper.

Sheldon (picks up train): Oh my! That’s awfully sticky. Alright, let’s see. Bernie Bunny has Two Daddies Now. It’s probably about homosexual rabbits. Jerry the Gerbil and the Bullies on the Bus. Read it, not helpful. Oh! Here we go. Stu the Cockatoo is New at the Zoo. (Reading) “Author Sarah Carpenter lives in Fort Wayne, Indiana, with her husband and best friend Mark, and their cockatoo Stu”. Hardly makes her an expert in making friends, wouldn't you agree?
Little girl: I don’t like birds, they scare me.
Sheldon: Me too! Most people don’t see it. What are you reading?
Girl: Curious George.
Sheldon: Oh, I do like monkeys!
Girl: Curious George is a monkey.
Sheldon: Somewhat anthropomorphized, but yes. (The very strict Leonard enters the children's book section eating a pretzel) Say, maybe sometime you and I can go see monkeys together. Would you like that?
Girl: Okay.
Leonard: (he's asking Sheldon a very sharp question) Sheldon, what are you doing?
Sheldon: I’m making friends with this little girl. What’s your name?
Girl: Rebecca.
Sheldon: Hi, Rebecca, I’m your new friend, Sheldon.
Leonard: (He reaches for Sheldon's arm sternly) No, you’re not, let’s go.
(Sheldon is now pulled off the tiny chair by Leonard with the book in his hand and he looks down at Rebecca for one last second whilst he is being dragged by Leonard)
Sheldon: (he refers to his folly with Rebecca in a panic) We were really hitting it off.
Leonard: (he indicates the ceiling to Sheldon) Don’t look up, there’s cameras.
(Both Leonard and Sheldon have now the children's section just as the scene now fades to black) 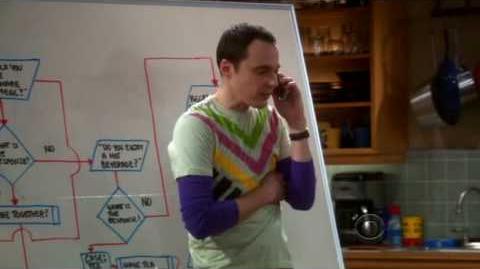 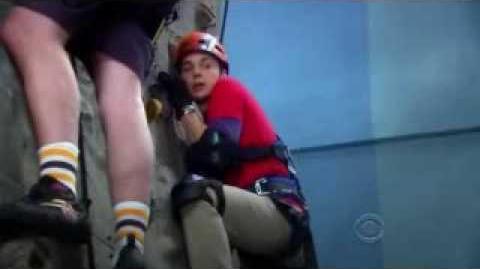