The Big Bang Theory Wiki
Register
Don't have an account?
Sign In
Advertisement
in: Episodes, Season 1, Christy,
and 13 more
English

The Grasshopper Experiment
"The Dumpling Paradox" is the seventh episode of the first season of the American sitcom The Big Bang Theory. This episode first aired on Monday, November 5, 2007.

Penny's promiscuous friend Christy from Nebraska is in town, and is easily picked up by Howard. They take over Penny's apartment, so she sleeps over at Sheldon and Leonard's apartment. Howard's affair takes up all of his time, leaving no space for his normal activities with the gang.

Howard shows Leonard and Raj the new voice recognition technology on his phone which turns out to be severely flawed. As the gang has wasted several minutes of their game time, Sheldon pesters them to commence Halo Night, but is interrupted by Penny, who then starts talking about her uninvited old friend from Nebraska; Christy. She accidentally mentions Christy's promiscuity, which quickly alerts Howard. While Penny is explaining Christy's history, they discover that Howard has disappeared and has been hitting on Christy in Penny's apartment. Surprisingly, Howard succeeds in seducing her and gets busy with her, leaving the gang short of one Halo player.

As Sheldon detests playing one-on-one, Penny has to replace Howard. Penny turns out to be naturally gifted at playing Halo, which angers Sheldon as he believes she is cheating. Penny, having had a fun night, retreats to her apartment only to come back moments later because Howard and Christy are using her bedroom for sexual intercourse. As a result, Penny sleeps in Leonard and Sheldon's apartment (though when they turn out the lights and head off to bed, they forget Raj is still in the kitchen, forcing him to sneak out and scaring Penny into following Sheldon's makeshift bed instructions). The following morning, Sheldon takes issue with Penny interrupting his Saturday routine of watching Doctor Who, when suddenly Howard makes a dramatic entrance and says "Hola, Nerdmigos". Penny wakes up and has found out that the amorous couple have befouled her robe, her loofah mitt and her stuffed bear collection. Christy then makes a grand entrance, and meets Sheldon and Leonard after kissing Howard. Penny asks Christy where she will stay so Howard offers Christy to stay at his mother's house. As Christy leaves, Penny warns Howard that Christy will sleep with him only as long as he keeps buying her things, but Howard simply responds "Really? Yea!"

Later, as Leonard, Sheldon and Raj are in a Chinese restaurant, Sheldon realizes Howard's importance in maintaining the integrity of the group. This point is reinstated when the gang asks Penny to play with them on Halo Night, but she refuses as she has plans to go dancing. As a result, Sheldon and the gang march over to Howard's house to confront him. Before they are able to confront him, they overhear Howard's mother and Christy having a big argument, which drives Howard out of the house. The argument leads to Christy breaking up with Howard, allowing him to return for Halo Night. While the gang is playing, Penny and her friends, knowing the guys are too engrossed in the game to notice them, have a laugh by telling the gang they want to have sex with them, and leave before the guys notice. Leonard does look up wondering what just happened and then goes back to his gaming.

Sheldon wears the Kablaam Computer shirt (available from The CBS Store now that the original manufacturer, Blank Generation, appears to be out of business), another discontinued striped shirt from Urban Outfitters, and a Green Lantern logo shirt; Green Lantern being one of Sheldon's most frequent shirt choices, second only to The Flash.

Leonard's shirts in this episode include: a Rubiks Cube shirt titled "Twisted", a white "Recycling" logo shirt , and his American Phytopathology Society shirt (they make their "member" shirts available to the general public, so please support them with your purchase). 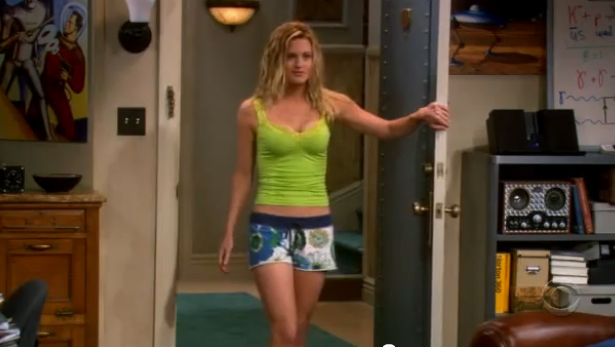 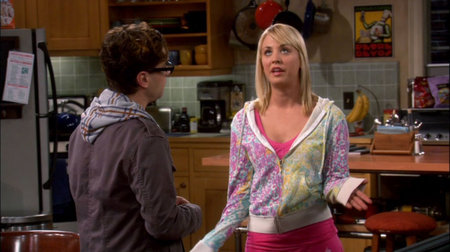 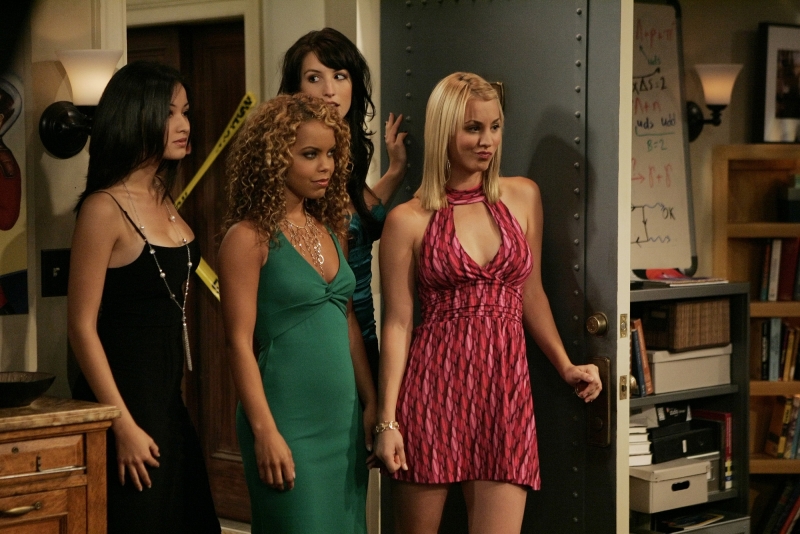 For dancing, Penny wears a printed halter dress by Guess.

Several items appear for the first time in this episode:

(The guys are at Leonard and Sheldon's place for Halo night. While Sheldon is setting up the Xbox 360 to the T.V., Leonard, Howard and Raj are trying the new voice search on Howard's phone.)
Howard: Watch this, it's really cool. (To phone) Call Leonard Hofstadter.
Phone: Did you say: Call Helen Boxleitner?
Howard: No, c- call Leon-nard Hof-stad-ter!
Phone: Did you say: Call Temple Beth Sader?
Howard: No.
Leonard: Hey, here, let me try. (To the phone) Call McFloono McFlooneyloo (chuckles).
Phone: Calling Rajesh Koothrappali.
(Raj looks up in confusion and shock, then his phone rings.)
Raj: Oh, ho, ho, very impressive! And a little racist.

(Penny, Sheldon, Leonard, and Raj are playing Halo at Leonard and Sheldon's apartment)
Sheldon: OK, that's it! I don't know how but she's cheating. No one can be that attractive and this skilled at a video game. (Sheldon walks away furiously)
Penny: Wait, wait Sheldon, come back you forgot something.
Sheldon: What?
Penny: This plasma grenade! (throws a plasma grenade at this character, and laughs with Leonard, while Raj is surprised) Look, it's raining you! (laughs on)

(Sheldon, Leonard & Raj go to convince Howard to join them for Halo Night).
Leonard: Sheldon, think this through. You're going to ask Howard to choose between sex & Halo.
Sheldon: No, I'm going to ask him to choose between sex & Halo 3. As far as I know, sex has not been upgraded to include high def graphics & enhanced weapon systems.
Leonard: (sarcastically) You're right. All sex has is nudity, orgasms, and human contact.
Sheldon: My point.
Christy: (From inside the house and off the screen) I'm just saying you could take your damn plastic off your couch once in a while!
Mrs. Wolowitz: WHY?! SO YOU AND HOWARD CAN GO HUMP ON IT?!
Howard: (tries to stop Christy and Mrs. Wolowitz' yelling) Ladies, ladies, I'm sure there's a middle ground.
Christy and Mrs. Wolowitz: SHUT UP, HOWARD!
Howard: You girls talk. I'm gonna take my scooter out for a little spin.
(Howard leaves and finds the guys on the front porch.)
Christy: Oh, you happy?! You drove your son out of the house!
Mrs. Wolowitz: WHY DON'T YOU STOP BUTTING IN WHERE YOU DON'T BELONG?!
Howard: (comes outside) Hey, what are you guys doing in here?
Christy: And why don't you start treating him like a man then?!
Sheldon: I-It's Halo Night.
Mrs. Wolowitz: HE'S NOT A MAN, HE'S A PUTZ, AND DON'TCHA TAKE THAT TONE WITH ME, YOU GOLD DIGGER!
Christy: What did you call me?!
Mrs. Wolowitz: You heard me! AND I'LL TELL YOU SOMETHING ELSE: YOU'RE BARKING UP THE WRONG TREE, 'CAUSE AS LONG AS YOU'RE AROUND, HOWARD'S OUTTA THE WILL!
Christy: You know what, I've got better offers, I'm outta here!
(Mrs. Wolowitz bangs on the door with a crash/bangs on the door/bangs the door with a crash/bangs the door.)
Mrs. Wolowitz: That's right, go back to Babylon, you whore (whoah/whoeh).
(There's an awkward pause between the guys)
Howard: So, Halo Night, huh?
(They start to leave)
Raj: I thought she (Christy) was the whore of Omaha.
Sheldon: Shh!

(The guys are playing Halo 3, and the atmosphere is intense)
Howard: Sheldon, you got him in your sights! Fire, he's charging his plasma rifle!
Sheldon: I can't shoot now, I'm cloaking!
Leonard: Raj, kill Sheldon!
Raj: I can't see him!
Sheldon: That's why they call it cloaking, dead man!
Leonard: Well, just start throwing grenades!
Raj: I'm all out!
(Penny and her three friends enter the apartment)
Penny: Hey guys, my friends and I got tired of dancing, so we came over to have sex with you.
(The guys are too engrossed in their game to even notice the girls are present)
Leonard: Raj, now jump in the tank!
Sheldon: We said no tanks!
Raj: There are no rules in hell!
Howard: MED PACK! I NEED A MED PACK!
(Penny turns to her friends)
Penny: Told ya!
(They leave, laughing)
Leonard: (on his feet now) There's a sniper, use your rocket launcher!
Raj: All I've got is a needler, and I'm all out of ammo!
Sheldon: And now you're out of life!
(As he's about to kill Raj, Leonard suddenly pauses)
Sheldon: Why'd you hit pause?
Leonard: I thought I... heard... something.
Raj: What?
Leonard: Oh, er, never mind, sorry!
(They resume playing)