The Big Bang Theory Wiki
Register
Don't have an account?
Sign In
Advertisement
in: Characters, Young Sheldon, Season 12,
and 11 more

Tam is a pessimistic, short-tempered Vietnamese-American boy who attends the same high school as Sheldon. He is the first friend in high school that Sheldon ever made. He has the same issues with friends as Sheldon; when they met Tam told Sheldon he had trouble making friends as well, and in "A Rival Prodigy and Sir Isaac Neutron" when Mary Cooper mentioned that Tam must have other friends Sheldon refutes it, stating "I'm all he's got, and even I avoid him half the time."

He laments his difficult childhood in war-torn Vietnam which includes his father having been in detention camp and his encounter with the Ku Klux Klan while first arriving in America. Tam may or may not have PTSD, given he has difficulty getting over such traumatic events and he takes his frustration out on other people, such as Sheldon's father George.

He tends to lose his temper at Sheldon a lot, (Although Tam often only makes sarcastic comments, similar to Leonard, which Sheldon does not notice.), but in his defense Sheldon often unnecessarily whines a lot, although Tam does this too. When Sheldon simply stated, "I'm not hungry", Tam responds that no one in Vietnam would ever say those words. Also when Tam referred to the American war effort as the "wrong side" of the Vietnam War (even though, ironically, he and his family had fled from Vietnam's brutal Communist regime to escape to America), George Sr. claims he's concerned about Tam calling the Americans the wrong side, before Tam angrily asserts he was just being polite when clearly he's not.

In S01E15, Tam develops a crush on Libby, a black female student for her affinity in geology; however, when he went to go see an IMAX film with her and tried to put his arm around her neck, she snapped back and rejected his romantic advances. Not wanting to get physically attacked by her, Tam came running back to Sheldon.

In "The Tam Turbulence", Tam, now in his mid-40s, meets Sheldon again after not having contact with him for more than 20 years.

He is revealed to be married and has a son as well as at least one other child.

The reason why he and Sheldon haven't spoken in 20 years is because they went to different colleges. Sheldon went to grad school in Caltech, while he went to college in Texas and married Beth.

I'm happy with my life.

You can drive him to the airport. 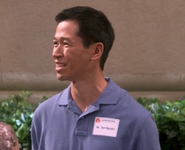 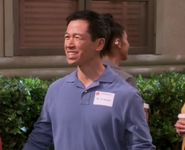 You know why I'm mad at you.

Imagining his life with Tam. - Leonard applies as a roommate.

Imagining his life with Tam. - Leonard applies as a roommate.

Imaginary - Tam: It's a Saturnarian miracle.

I'm happy with my life.

You can drive him to the airport.