Steven Michael Burns (born October 9, 1973) is an American actor, television host, guitarist, musician, and singer. He is well known as the original host of the long-running children's preschool television program Blue's Clues from 1996 to 2002, for which he was nominated for a Daytime Emmy in 2001.

Burns played in bands called Sudden Impact US, Nine Pound Truck, and the Ivys (which he has called a "Morrissey rip-off band") while in high school and college.[2] He studied theatre under an acting scholarship at DeSales University in Center Valley, Pennsylvania, in the Lehigh Valley, where he was discovered by an agent.[3] He dropped out of school and moved to New York City to then become a professional actor.[4] He lived in a basement apartment near Times Square, finding his first success as a voice-over artist for ads and making appearances on Homicide: Life on the Street and Law & Order.[3]

He lives in Williamsburg, Brooklyn.[5] 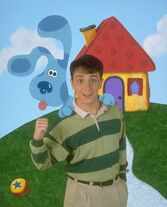 Steve and Blue from Blue's Clues

Steve, Joe, Josh and Blue from Blue's Clues & You
Add a photo to this gallery

Retrieved from "https://bigbangtheory.fandom.com/wiki/Steve_Burns?oldid=329344"
Community content is available under CC-BY-SA unless otherwise noted.