The Big Bang Theory Wiki
Register
Don't have an account?
Sign In
Advertisement
in: Amy, Leonard, Music,
and 20 more

"Soft Kitty" is a children's song that Sheldon's mother used to sing to Sheldon when he was sick as a child. Today, he still requests his caretaker to sing this song to him whenever he feels ill. Sometimes, he also sings it to others who have fallen ill.

The song is originally called "Soft Kitty", and parts of its lyrics sequence have been altered for the version sung in The Big Bang Theory.

The song is first introduced in "The Pancake Batter Anomaly" (S01E11) where Penny sings it to Sheldon when he has caught a cold.

In "The Vegas Renormalization" (S02E21), Penny had to sing "Soft Kitty" to Sheldon again on the pretense that "...Homesick is a type of being sick", since he had to spend the night in Penny's apartment because he locked himself out of his and Leonard's apartment.

When Sheldon was feeling sad about being betrayed by his friends (and not being able to attend Comic Con) in "The Electric Can Opener Fluctuation" (S03E01), Penny starts singing "Soft Kitty" in an attempt to cheer him up, but was interrupted by Sheldon as he said, "That's for when I'm sick!! Sad is not sick."

In "The Adhesive Duck Deficiency" (S03E08), when Penny was a little lightheaded from the powerful pain medication and a muscle relaxer that the hospital gave her after she dislocated her shoulder from slipping in the bathtub, Penny asked Sheldon to sing "Soft Kitty" to her (according to her, "Injured and drugged is a kind of sick"). After much prompting, the two sing it as a round.

In "The Rhinitis Revelation" (S05E06), Sheldon's mom, Mary, sings "Soft Kitty" to Sheldon after he gets sick from being in the rain after he felt that his mother was ignoring him over spending time with his friends.

In "The Proton Resurgence" (S06E22), Sheldon sings the song to Professor Proton while the latter is in hospital.

In "The Anxiety Optimization" (S08E13), Leonard and Penny sing the song as a lullaby to put Sheldon to sleep, because he hadn't slept in days.

In "The Recollection Dissipation" (S10E20), Sheldon is recovering from both stress and a fever brought on by him working on two different projects at once. Amy sings the song to him in three different languages (English, German, and Mandarin) while playing an autoharp.

In "The Werewolf Transformation" (S05E18), Penny mentions to Sheldon that she sings "Soft Kitty" to him when he's sick.

In "A Sneeze, Detention, and Sissy Spacek" (S01E13), when Sheldon is sick in bed, Mary sings the song to him.

This song's tune originates from nineteenth century Warsaw (Poland) and it was used in a lullaby titled "Wlazł kotek na płotek", written by Oskar Kolberg and composed by Stanisław Moniuszko. However, the Lyrics for this lullaby were about a kitten on a fence.

The modern song which we know now is in fact named "Warm Kitty". The lyrics were written by Edith Newlin and the tune is traditional.[1] It was published in 1937 by Willis Music Co. These lyrics differ slightly to the one used in the show, with the show changing the sequence.

Both "Wlazł kotek na płotek" and "Soft Kitty" are about cats, the similarities ends there, the melodies doesn't sound alike. 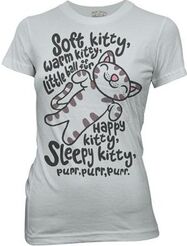 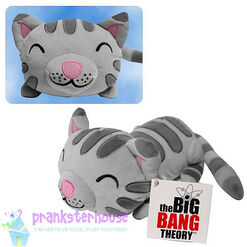 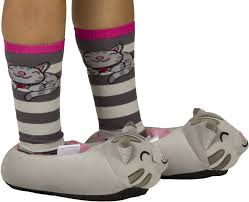 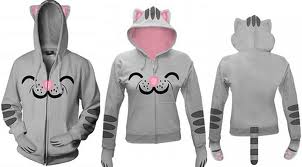 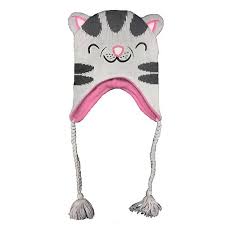 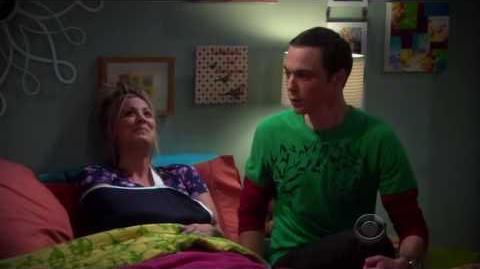