The Big Bang Theory Wiki
Register
Don't have an account?
Sign In
Advertisement
in: Characters, Nebraska, Penny,
and 4 more

In "The Dumpling Paradox" (S01E07), Penny says that her friend Christy Vanderbel was engaged to her (Penny's) cousin while she was coitus|sleeping with her brother.

In "The Pirate Solution" (S03E04), it is revealed that he works in a meth lab and is described as a 'kind of chemist' and Penny told Leonard Hofstadter that Leonard would like her brother.

In "The Russian Rocket Reaction" (S05E05), Penny says that her family cat got stuck inside Randall's camper trunk.

In "The Rhinitis Revelation" (S05E06), Penny asks God to make her brother stop cooking methamphetamine, but without involving the police when Sheldon's mother decides to get them to pray at a Roman Catholic church.

In "The Status Quo Combustion" (S07E24), Penny wants to schedule her wedding 12 to 18 months away so her brother can attend after he gets out of prison.

In "The Bachelor Party Corrosion" (S09E03), Penny's father tells Penny that her mother is out with her brother celebrating one month of being sober. He had also received his 10th one-month-sober chip.

It's revealed in "The Convergence-Convergence" (S09E24) that Penny's brother had been released from prison due to overcrowding, making him eligible to attend her redo wedding ceremony with the family.

In "The Conjugal Conjecture" (S10E01), Randall first appears in person and comes to Pasadena with his parents to attend Penny's vow renewal. He smiles a lot and often embarrasses his mother. He also thanks his mother for his new teeth, hinting that he often used his product as well as cooked it as frequent use of methamphetamine can lead to tooth decay or "meth mouth."

In "The Emotion Detection Automation" (S10E14), Penny mentions that she is trying to get him a job interview and needs a place to stay, which makes Leonard upset that she did this without telling him and causes an argument, but Leonard also gets really angry with Sheldon since it's the latter's fault the argument started.

Randall is sweet and cheery, if not somewhat dim. You might have trouble believing that he's the brother who went to prison for selling homemade crystal meth Penny talks about.

He also appears to embarrass people on a few occasions.

He also has no qualms about discussing his criminal background, much to the discomfort of his mother.

Randall with Penny and their parents

Penny's family arriving at her apartment.

Susan telling Randall to see what happens when you work hard.

Hey, she just sells drugs. I had to make 'em.

We are not white trash!

Is everybody getting to know each other?

Thank you for cleaning yourself up for your sister's wedding. 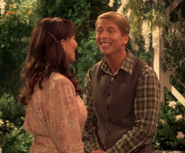 And thank you for my new teeth.

I need to say something to someone pretty special.

Heading to the airport.