The Big Bang Theory Wiki
Register
Don't have an account?
Sign In
Advertisement
in: Articles With Videos, Robots, Star Wars,
and 8 more

The Mobile Virtual Presence Device (MVPD), is a robot that Sheldon Cooper built as protection from the dangers of life in "The Cruciferous Vegetable Amplification". The MVPD contains a webcam, flat panel display showing Sheldon live, loudspeakers, a mobility aid|mobility platform, and is decorated with one of Sheldon's shirts on a hanger.

Penny liked to refer to the MVPD as "Shelbot". Howard often cracked Star Wars-related jokes that Raj came up with, comparing Sheldon to R2-D2 (a character from Star Wars) such as, "Hey look, it's Leonard and R2-D-bag".

The inspiration for the Shelbot and the storyline for "The Cruciferous Vegetable Amplification" was borne out of a June 12, 2010 article in the New York Times entitled "Merely Human? That's So Yesterday" and the accompanying video of Sergey Brin and Scott Hassan maneuvering a Texai telepresence device that was on loan from Willow Garage in Menlo Park, California.

The producer of the video piece was amused by the childlike engagement the participants gave in helping Sergey and Scott driving around the event. She chose to call the device the "Brinbot", which likely inspired the Shelbot moniker. 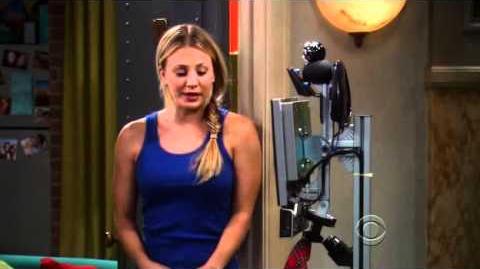