The Big Bang Theory Wiki
Register
Don't have an account?
Sign In
Advertisement
in: Main Cast, Cast, Amy,
and 8 more

2010-Present
Dr. Mayim Chaya Bialik (born December 12, 1975, San Diego, California) is an American actress, neuroscientist and author best known for her lead role as Blossom Russo in the early-1990's NBC sitcom Blossom. On July 19, 2012, she received her first Emmy nomination in the Supporting Actress in a Comedy Series category for her portrayal of Amy Farrah Fowler on The Big Bang Theory. She received another Emmy nomination for the role of Amy in 2013.

Over 2 years before her first appearance as Amy on the show, Mayim herself was mentioned (though not by name) in the episode "The Bat Jar Conjecture" when Raj suggest they recruit "the actress who played TV's Blossom" to join their Physics Bowl team.

Bialik was born in San Diego, California, the daughter of Beverly, a nursery school director, and Barry Bialik, a high school drama teacher.[1] Her grandparents emigrated in the late 1930s from Poland and Czechoslovakia/Kingdom of Hungary (1920-46)|Hungary. Bialik was raised in Reform Judaism.[2] Her first name means "water" in Hebrew.

Bialik started her career as a child actress in the late 1980s. Her early roles included the horror film Pumpkinhead, her first acting job;[3] and guest appearances on The Facts of Life and Beauty and the Beast (television series). In 1988, she appeared in Beaches (1988), playing Bette Midler's character as a young girl. She had imitated Bette in her act. She was also featured in the video clip of Liberian Girl by Michael Jackson.  In 1989 she appeared in several episodes of Webster as Webster's nerdy friend, Frieda.

In 1990, Bialik was tied to two television pilots, Fox's Molloy and NBC's Blossom. Molloy at first produced six episodes for a tryout run, followed by the shooting of the pilot special for Blossom. The latter actually aired two weeks before Bialik's Fox series, and ultimately garnered higher ratings than it. When Molloy folded after its six episodes, Blossom was pursued as a regular series. The actress' greatest success to date came in 1991 when Blossom joined NBC's Monday night lineup following The Fresh Prince of Bel-Air. Both shows enjoyed popularity, especially among younger viewers, for the first couple of years of their respective runs. Blossom aired until 1995.

Between 1995 and 2005, Bialik mostly did voice work for cartoons, such as The Real Adventures of Jonny Quest, and Recess (television series).

She appeared in the feature film Kalamazoo? released in late 2005. She appeared in three episodes of the HBO comedy series Curb Your Enthusiasm as Jodi Funkhouser, the lesbian daughter of a friend of Larry David. Bialik also made guest appearances as a fictionalized version of herself in the series Fat Actress. Bialik had a guest appearance as a Hasidic Jew in an episode of Saving Grace.[4][5] She has a recurring role as the high school guidance counselor in ABC Family's The Secret Life of the American Teenager and also guest-starred as a potential girlfriend for the character Sheldon Cooper, played by Jim Parsons, in the 3rd-season finale of the hit CBS comedy series The Big Bang Theory.[6] She also had an appearance on the Fox TV show 'Til Death in which she has a reunion of sorts with two of her Blossom costars- Jenna von Oÿ – who played Blossom’s quirky best-friend Six – and Michael Stoyanov – who played Blossom’s older brother Anthony.[7] She has optioned the Rashi's Daughters books.[8] She appeared in an Old Navy commercial as Blossom with her former co-star Joseph Lawrence in 2012.[9]

It was announced on July 14, 2010, that Mayim would be writing her first book called Intuitive Parenting. It's a commonsense guide to attachment parenting - including her first-person advice on co-sleeping, baby wearing, extended nursing, natural birth, and more - showing from her own experience how any parent can embrace these holistic principles to raise a happy, secure baby, to Michelle Howry at Touchstone Fireside, for publication in spring 2012, by Anthony Mattero at Renaissance.[10]

Mayim was nominated for a 2013 Emmy Award for Best Supporting Actress in a Comedy, but did not win.

In 2014, she became the guest host on the TV Land edition of the classic reality show "Candid Camera".

In 2016, she won her first acting award as Best Supporting Actress at the Critic's Choice Awards. She was totally surprised and gave a loving tribute to her father who died the previous year.

In March 2016, Mayim was quoted that she thought all of the Big Bang cast are overpaid.

In November 2016, Mayim was quoted saying that Amy was still with Sheldon because she finds him enjoyable, attractive and intelligent so she is willing to put up with his quirks.

Mayim is author, has a blog and posts YouTube videos.

At the end of Blossom, she chose to attend University of California, Los Angeles, despite having been accepted at both Harvard and Yale.[11][12] She stated that she wanted to stay close to her parents and did not want to move to the East Coast. She earned a bachelor's degree in 2000 in neuroscience, Hebrew, and Jewish studies, and went on to the PhD. program in neuroscience. A 2002 interview stated that Bialik is now involved in Conservadox Judaism.[2] She continues to study Judaism with the help of her Partners in Torah partner, Allison Josephs.[13]

She is a keen musician, playing piano, bass guitar and trumpet. She has also had harp lessons in order to be able to play the song fragments performed by Amy (including The Girl from Ipanema, Everybody Hurts and Wanted - Dead or Alive, rather than miming to a pre-recorded track.

She took a break from studies in 2005 to return to acting.[14] Bialik completed her PhD in 2008, but is not pursuing an academic career in the near future;[15] her dissertation was an investigation of Prader-Willi syndrome.[16][17]

She was featured in TLC's What Not to Wear in an episode which aired May 29, 2009. The actress Rachael Harris also appears in the episode, as one of Mayim's friends at the reveal party that show always closes with.

Bialik was a judge on the second season of King of the Nerd}.

On March 11, 2014, Mayim Bialik (Amy) visited "The Talk" and was interviewed by Sara Gilbert (Leslie Winkle). They both appeared on "The Lunar Excitation"; Amy's first appearance and Leslie's last appearance. Both were main characters at one time. They finally appeared together in the same scene in the 200th episode in February, 2016, but their characters did not interact.

After the series ended, she plans to spend most of her time raising her two sons.

On August 15, 2012, a day after the taping of the first episode of The Big Bang Theory's sixth season, Mayim, who was driving in her white Volvo after appearing on "The Soup" was involved in an accident. A car carrying Chilean tourists made a sudden left turn at an intersection on the corner of Hollywood Boulevard and La Brea, and hit her car. As a result, Mayim suffered a serious injury on her right hand, with eyewitnesses reporting that there was a lot of blood everywhere. Mayim was taken to a nearby hospital for treatment and rumors surfaced not long after, that she might lose her fingers. However, Mayim shot down the rumors by posting on her Twitter (with her husband's help) that she will keep her fingers. She added later that her right hand is very impaired and she has a long road of recovery ahead of her, so her assistant, Brandon, will help her type her blogs. People Magazine photographed her post-accident, wearing a gauze on her left forearm and a full cast on her right arm. It was also confirmed that her injury will not affect the production of The Big Bang Theory, with executive producer and writer Bill Prady posting on his Twitter that Mayim will attend the next episode's rehearsal with all her fingers intact. Mayim herself confirmed that she will not take any week off from the show. 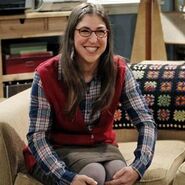 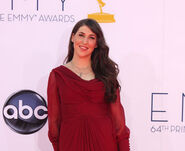 Publicity shot of Mayim as Amy. 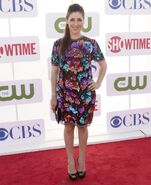 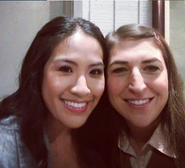 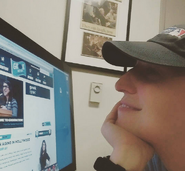 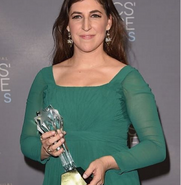 At the 200th episode party. 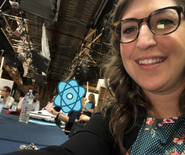 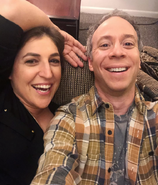