Robert Wolcott is a brilliant but reclusive topologist, noted for Wolcott's Theorem, who has made great strides in his work on nonlinear time while ignoring the rest of the world. Sheldon Cooper has corresponded with him over his string theory research, so he has invited Sheldon to his cabin in the middle of nowhere to discuss his own breakthrough. Dr. Wolcott has a new mathematical approach that would help Sheldon conceptualize the dimensions in string theory; the math is saying time has multiple dimensions, the same as space. How this works in the context of a singularity involves non-abelian group theory. He doesn't see where string theory fits into this, and surmises that is where they can be of help to each other. 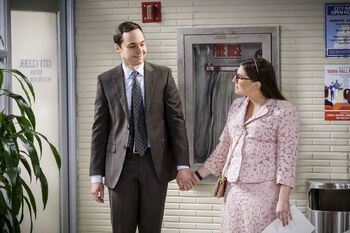 All good things must come to an end, and the same is true about the series of The Big Bang Theory.

Don't fret, though: Season 12 concluded on a high note! Sheldon won the Nobel Prize, Penny is expecting and, everything came full circle with all friends gathered together as one big family.

Go to these sites for info or for help with your own wiki!