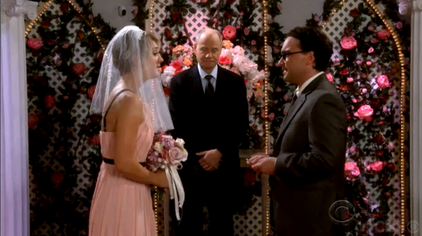 Leonard and Penny are at a Las Vegas wedding chapel and are picking out their wedding package. Leonard finds one that has music, flowers and streams the ceremony on the Internet. Penny has always "wanted" a wedding with a comment section; while Leonard wants to give gorgeous blondes hope that they can land a short near-sighted scientist. Leonard wants to know if Penny wants to put it off. She tells him that it's been long enough and she's ready to do it.

The wedding chapel is running a little behind and Leonard suggests breakfast next door at the strip club. Penny doesn't want to have scrambled eggs with glitter on them. Leonard realizes that it may not be the wedding Penny envisioned, but she is fine with it. Leonard also wants her to promise that she is okay

with everything brought up in the car. Penny doesn't want Leonard to keep bringing it up. He quips that they have the rest of their live to drag things up from the past and fight about it. After again mentioning breakfast, she is concerned that they might miss hearing their names called. Not to worry - the wedding chapel provided them with a vibrating coaster. "And the fairy tale continues." quips Penny.

Later Leonard and Penny are receiving final instructions from the Minister (church)|minister, when Leonard asks about the rose petals that are supposed to be covering the aisle. The chapel is out of rose petal which the couple says is fine. A woman shouting from another room offer to use the potpourri from the bathroom. They strongly reiterate that everything is fine. They just want to get married. "This is it," remarks Leonard. Penny agrees and they tell each other that they love each other. The subject of the potpourri is again brought up interrupting their kiss and they both shout that they're good about it.

At the altar the minister asks Leonard and Penny if they had prepared vows. Penny is surprised that Leonard has. Wanting to hear his vows, she lets him say them while she'll come up with something "mushy". Leonard tells Penny that they are made from atomic particles|particles that have existed since the moment the universe began. He feels like these atoms have traveled over 14 billion years to create them so they could come together and make them whole. Penny replies, "Wow." First she says sweetly say that he is the love of her life and her best friend and starts quoting the lyrics to "You've Got a Friend In Me" from the Disney film "Toy Story". The minister asked if that was from "Toy Story," Penny says it was and that Leonard loves it. Leonard gets misty-eyed and confirms that he does.

While in Pasadena watching the wedding, Sheldon keeps pushing Amy to make a decision about their relationship causing her to break it off. Bernadette runs off after Amy, while Sheldon wants to go home and he leaves with Raj. The online broadcast comes

to a conclusion as Leonard and Penny are pronounced man and wife. Stuart and Howard are the only ones remaining who catch it. Leonard and Penny come up to the camera joyfully proclaiming that they did it and that they are so glad that the gang could witness it. Howard quips that they'll just tell them that it was beautiful in the comments section.

After the ceremony, Leonard carries Penny into a hotel room where they make out, but Penny still can't stop thinking about Leonard's kissing Mandy Chow on the boat and after a huge fight, they return to Pasadena and go back to their respective apartments.

In the next episode, Penny talks things out with Amy and Bernadette while Leonard talks to Mandy and at the end of the episode, Leonard and Penny reconcile and head into the bedroom to make their marriage official. Sheldon gives them a wedding gift: Train tickets to San Francisco.

In the Season 10 premiere episode "The Conjugal Conjecture", Leonard and Penny have another wedding ceremony, this time with their friends and families present.

"You've Got A Friend In Me"

(About to walk down the aisle)
Leonard: This is it.
Penny: I know.
Leonard: I love you.
Penny: I love you too.
Receptionist: Was that a yes on the potpourri?
Leonard: We’re good.
Penny: No, thank you.

(About to recite their vows.)
Minister: Before I go any further, have either of you prepared your own vows.
Penny: No.
Leonard: Yes.
Penny: You wrote vows?
Leonard: Yeah.
Penny: Well, I don’t have any. You’re kind of making me look bad.
Leonard: Its okay. I don’t have to say them.
Penny: I’ll come up with something mushy. You’ll cry. We got this.
Leonard: Penny, we are made of particles that have existed since the universe began. I like to think those atoms have travelled 14 billion years through time and space to create us so that we could be together and make each other whole.
Penny: Wow.
Minister: Penny.
Penny: Right..um..okay. Leonard, I mean, you’re not only the love of my life. I mean, you’re my best friend. You’ve got a friend in me. You got troubles. I got them, too. There isn’t anything I wouldn’t do for you. We stick together, and we can see it though…cause you got a friend in me.
Minister: Isn’t that the song from “Toy Story”?
Penny: He loves that movie.
Leonard: I do.