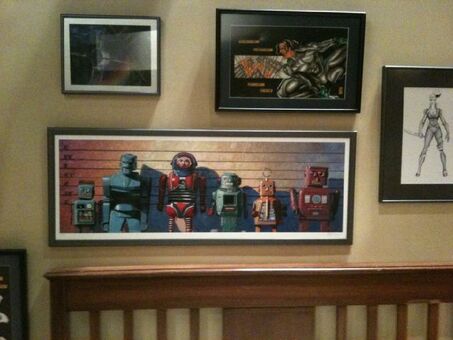 Leonard Hofstadter's bedroom has sandy tan colored walls, (like the rest of [[Apartment 4A|the apartment}}). Leonard's room seems to have a relaxing, calm composure, compared to his roommate Sheldon who seems to focus on schedules and work. Like the rest of the apartment the books, collectables, and posters, seem to move frequently. The bedroom seems to contain furniture that has an eye towards durability rather then value, and has a mission style, table, and lamp.

In The Veracity Elasticity, Penny was slowly removing Leonard's collectibles to make herself feel at home. Penny eventually re-decorated Leonard's room to look like a couple's roommore girly, then Leonard slowly moves Penny's items in the room into a closet.

Queen Marry Souvenirs Mug,T-shirt, Hat, and snow globe, mug is thrown at the door by Leonard, destroying the mug, but the mug is seen again in season 4

Leonard and Penny Prom do over picture

Retrieved from "https://bigbangtheory.fandom.com/wiki/Leonard_Hofstadter%27s_Bedroom?oldid=271289"
Community content is available under CC-BY-SA unless otherwise noted.