The Big Bang Theory Wiki
Register
Don't have an account?
Sign In
Advertisement
in: Characters, Cooper Family, Season 1,
and 18 more

View source
watch 00:53
Who is George Cooper?
Do you like this video?
Play Sound

His mother calls both him and Missy "dumb as soup" in "The Luminous Fish Effect" (S1E04), though this may be an exaggeration.

Sheldon mentions him in "The Jiminy Conjecture" (S3E02), saying "I grew up with an older brother and a very contentious twin sister."

Sheldon's family tree, depicted briefly in "The Cruciferous Vegetable Amplification" (S4E02), shows a brother as well as a twin sister.

Sheldon mentions in "The Fish Guts Displacement" (S6E10), that his brother would sneak into their father's truck and drink his driving whiskey.

In "The Fortification Implementation" (S8E20), Sheldon tells Amy that his brother and sister built forts in the living room and wouldn't let Sheldon in, which he hated so much.

In "The Maternal Combustion" (S8E23), Sheldon tells Leonard's mother Beverly that his brother and sister are mouth-breathing idiots.

In "The Matrimonial Momentum" (S9E01), Mary Cooper mentions that Sheldon's brother has a girlfriend and that she would not let him give her grandmother's ring (which she gave to Sheldon for Amy) to that whore. When Sheldon asks if Mary Magdalene was a woman of ill repute, Mary tells Sheldon that when his idiot brother redeems mankind, he can date whoever he wants (This suggesting that despite being a loving parent, Mary is on bad terms with or has a low opinion of George Jr.).

Sheldon briefly talks about his brother while filming his part of Leonard Nimoy's documentary in "The Spock Resonance" (S9E07).

In "The Solder Excursion Diversion" (S9E19), while Sheldon is with Amy at his storage unit, he shows her a golf ball which Sheldon's brother threw at Sheldon's head which left a dent.

In "The Matrimonial Metric" (S11E12), Sheldon mentioned his brother while discussing candidates for the best man for his wedding with Amy.

Georgie made his first appearance in "The Sibling Realignment". He runs a chain of tire stores he founded called "Dr. Tire", which is the most successful chain in Texas, and is mad that Sheldon only comes to see him when he wants something. Georgie wants Sheldon to apologize because George had to take care of their emotionally-devastated mother and teenage Missy after their father died and Sheldon leaving for college afterwards. To make matters worse, Sheldon's college attendance, and then studying in Germany, cost the family a lot of money and George Jr. had to fund his first tire store from scratch. He also holds some resentment for Sheldon being the child their mother is most proud of, despite Georgie's sacrifices to make his business a success. Georgie also had looked after him much like Leonard does, by apologizing to others. Sheldon finally gets what happened between them and apologizes. As a result, Georgie attends Sheldon's wedding.

George Jr. appeared again in the season 12 episode "The Tam Turbulence", where he talks to Leonard, Howard and Raj via webcam about Sheldon's childhood friend Tam, whom they are curious about. It was revealed that he had a long conversation at the wedding with someone he thought was Tam, which makes him embarrassed when Leonard mentions that Tam wasn't at the wedding.

His Young Sheldon self appeared through a videotape in "The VCR Illumination".

When Sheldon and Amy won the Nobel Prize in "The Change Constant", he and two of his ex-wives sent Sheldon congratulatory text messages. Sheldon also mentioned him in his Nobel acceptance speech and thanked him.

When his parents got drunk one night, they had intercourse and conceived him. (A Crisis of Faith and Octopus Aliens)

I always wanted a sister.

You got the brains.
R-1.jpg
Brother George Cooper.

I wouldn't miss it.

You're supposed to be the smart one.

I have to drop everything... 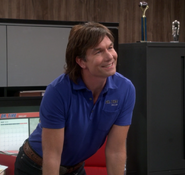 Talking with a customer. 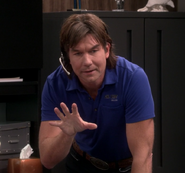 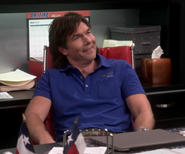 George doesn't get everything.

Who do you think took care of the family?

I'd be honored to come.

A Sheldon thank you.

I always wanted a sister.

You got the brains - I got the looks.

Fun with Flags puts me to sleep.

The Coopers and the Wheatons.

If you need any help.

So you're Sheldon's big brother.

I got the bod and the face and the hair.

And did you know my Amy was Amelia Earhart in the eighth grade.

Raj has a question.

Why aren't tire tires on any of those Star Wars vehicles?

Excuse me. Where are you going?

I am happier now than I have ever been.

I'm here if you need me to step in.

Penny and Leonard watching the Coopers.

Penny and Leonard following down the aisle.

George talking to Leonard via Skype

I remember his little Vietnam buddy.

Wasn't he at the wedding?

Georgie pretends to be baptized for Veronica.
Community content is available under CC-BY-SA unless otherwise noted.
Advertisement