View source
watch 01:33
House of the Dragon Trailer - The Loop
Do you like this video?
Play Sound

Bobbi is first seen in "Jiu-Jitsu, Bubble Wrap, and Yoo-hoo" where she is shown to be bullying Sheldon. It is revealed that she slaps him around; takes his lunch money and she even put a tadpole down his shirt.

Later, she enters the Cooper garage and injures Sheldon's knee. After that, Sheldon hires Missy to go deal with her, but Missy instead ends up playing and having fun with her and Billy. 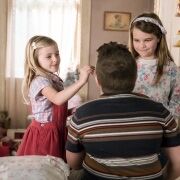