Bert first appeared in "The Contractual Obligation Implementation" as a socially awkward character that Raj met just prior to a library date with Lucy. He asked to join their date, but Raj sent him away. While leaving he gives Lucy a fair warning about Raj. This character is unnamed in the plot, but the closing credits gave the name "Bert".

Bert also appears when he meets Amy while she was working in her own lab at Caltech, in "The Occupation Recalibration". Bert keeps bringing Amy interesting and beautiful rocks every day. It takes Howard and Raj to make Amy aware that he likes her. Bert then asks her to a rock show which she declines because she has a boyfriend. When Bert starts talking about how no one wants to do anything with him, Amy, in a fit of sympathy agrees to go. Unfortunately, Bert is taking it as a date. Rajesh Koothrappali and Howard offer to talk to him to let him down easy and they end up going with him to the rock show.

In "The Dependence Transcendence", Bert hosts a Caltech party that only Amy and Penny attend. He feels that Amy is the coolest girl at work and that Sheldon is cool only because he is dating Amy. As the girls are leaving Penny tells a geology joke, and he says they have to leave because he is in love with both of them.

He reappeared in "The Fetal Kick Catalyst" as a guest at Shamy's brunch in their apartment. He mentions that a girl he was living with once moved out and took all his best rocks.

He reappeared in "The Geology Elevation" after winning a $500,000 MacArthur Fellowship grant from Caltech which makes Sheldon jealous. He admits that he has a thing for Amy, but once he won his grant he thinks that he could do better. He also thinks about nominating Howard for another one which, irritates Sheldon even more.

Bert reappeared in the episode "The Allowance Evaporation" where he is with Shamy on their date night due to his own date bailing on him. He also casually reveals his knowledge of Amy and Sheldon having coitus annually, much to her chagrin.

He reappeared in "The Separation Agitation", and it's revealed that he has a recent girlfriend named Rebecca, who only appears to be with him for his grant money. After breaking up with her, Bert instantly regrets it and buys expensive stuff to successfully win her back.

In "The Geology Methodology", Bert asks Sheldon to collaborate with him on a Dark matter project involving neutrino signatures, an idea which Sheldon likes, but is embarrassed to tell others that he is working with a geologist. When Bert learns this he stops working with Sheldon and replaces him with Leonard.

He appeared in "The Solo Oscillation" where he replaced Howard in Howard and Raj's band "Footprints on the Moon".

In "The Bow Tie Asymmetry", Bert went to the Shamy wedding. Howard thought he cleaned up nice and Bert compared himself to a geode, which has to be broken open to see the beauty.

He reappeared again in "The Wedding Gift Wormhole", when Amy and Sheldon were on a scavenger hunt and needed some help figuring out what the wedding gift was; it turned out to be a quartz chakra wand.

In "The Meteorite Manifestation", Bert wants Raj's help cutting open a meteorite with a band saw. Leonard wants to do it with his laser, but Bert declines. Leonard gets angry that he is left out. He steals the meteorite, cuts it open and then gets infected with an virus that turns him in to a flesh eating zombie. He wakes up, starts to glow and then attacks Penny and wakes up again. Finally he apologizes to Bert and Raj.

In "The Inspiration Deprivation", Howard buys a scooter like he used to own, with him and Raj planning to relive their good old days. Bernadette is angry and doesn't want him to get hurt. He sells it to Bert who immediately has an accident. At the emergency room he meets a nurse that gives him her number.

In the series finale, Bert looks after Cinnamon for Raj. He intends to use Cinnamon to help get girls and will let Raj know if she dies in his care.

Thanks for coming. You're nice people. 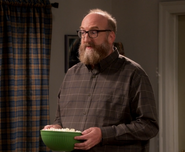 I'm going to clean up.

Afraid of the flying cork.

To my friend Stuart.

I'm not really part of the group.

A toast to Stuart.

I propose a toast. 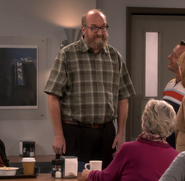 The guys talking to Bert about his grant.

Bert and his grant.

Walking out to hit a water fountain. 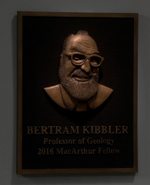 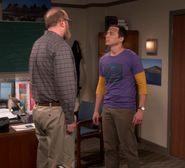 Standing up to Bert.

I have a lot of money.

Bert needs some help with his project.

Waiting for his G-Harmony date.

Bert waiting for his date.

Can I come back?

Bert has a new girlfriend.

I broke up with my girlfriend.

Bert has a new girlfriend.

Talking with his new girlfriend.

Footprints on the Moon performing.

Raj has a question.

Why aren't tire tires on any of those Star Wars vehicles?

Excuse me. Where are you going?

Penny and Leonard watching the Coopers.

Penny and Leonard following down the aisle. 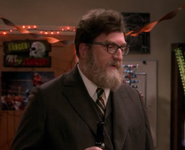 Bert and Bernie - the long and the short. 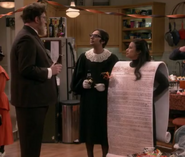 Shocked at the fake Howard and Bernadette.

Leonard apologizing about being jealous.

I have a meteorite which has an organic signature inside.

I could use the help of an astrophysicist.

Leonard, what are you doing?

If she dies, I'll just tell you.
Add a photo to this gallery
Retrieved from "https://bigbangtheory.fandom.com/wiki/Bert_Kibbler?oldid=351161"
Community content is available under CC-BY-SA unless otherwise noted.