Apartment 4A is the primary permanent set for The Big Bang Theory and is the apartment where Sheldon lived til "The Cohabitation Experimentation" when he moved into Apartment 4B with his girlfriend, and eventual wife, Amy. At first it was only for five weeks due to Amy's apartment being flooded but Sheldon and Amy chose to live there permanently. Leonard Hofstadter has lived in this apartment since 2003 and currently lives there with his wife Penny. It is situated in an apartment complex at 2311 North Los Robles Avenue. By season 8, after Penny and Leonard's engagement, she was seen living there most of the time though not officially moved in. When viewed from the satellite photographs in "The Countdown Reflection" episode, it appears to be located at 215 South Madison Avenue. Due to the primary characters in the series, except Penny, being of the "nerd" social classification, the apartment has been dubbed as "Nerdvana" by Howard in season 1 episode 14 "The Nerdvana Annihilation".

Apartment 4A is located on the fourth floor of the building across the hall from Apartment 4B, where Penny lived and where Sheldon and Amy live now. Apartment 4A is known to be a corner apartment, being that it has windows facing outside on two sides. It may, in fact, be one of only two apartments on the floor, and may therefore have outside walls on all sides (other than the wall shared with the fourth floor hall and stairwell. The mailboxes in the lobby, however, indicate there are four units per floor, with only four floors in the building. The presence of unit 5A in season 2 however makes the mailboxes make absolutely no sense.

Apartment 4A is also a hidden Easter egg (apt 4A = foray) - either a "great raid" or the voice of Rocky the Flying Squirrel and Karen from Frosty the Snowman, June Foray.

For information on the actual view from their apartment see [1]

The apartment has one living room, one bathroom, and two bedrooms. A hallway links the living room to the bedrooms and bathroom. The kitchen is part of the main living area.

Immediately upon entering, the wall on the right houses Sheldon and Leonard's desks and the TV. The wall ends in the kitchen part. This wall is rarely visible, being the wall that is the view into the apartment from which the episodes are filmed, and has only been shown on two occasions (one is in "The Euclid Alternative", S2E5 and the other is "The Colonization Application", S8E17). The first was a view of the apartment from the hallway and the second had Leonard sitting at his desk during Sheldon's video.

The wall immediately to the left after entering the apartment has a long bookshelf that ends at a small closet, with the wall itself ending at a large window with a desk and telescope. These bookshelves, behind the couch, serve to hold the boy's vast collection of books, some {w|software}, as well as an ever changing selection of their various collectibles. Pasadena City Hall can be seen from the window at the alcove, which has been used on several occasions:

After the window, there is a corner and the hallway that leads to the bathroom, as well as Sheldon and Leonard's bedrooms. The kitchen area is a small area that has an island with rarely used barstools since they usually eat in the living room area. A window is located at the end of the visible wall of the kitchen area (which can be clearly seen in several kitchen area scenes, one typical instance is in "The Loobenfeld Decay" (S1E10), when Toby Loobenfeld talks with Sheldon in the kitchen area). Presumably, this window is one of the two windows (the other being the large window described above) that Sheldon has stated "creates a cross breeze" when he describes his Spot.

Sheldon, at one point in time, had painted luminous glow-in-the-dark arrows on the floor pointing to the various nearest emergency exits throughout the room. He shows them to Rajesh Koothrappali in "The Roommate Transmogrification" (S4E24), but gets rid of them before "The Friendship Contraction" (S5E15) when he explains that they were "wildly carcinogenic".

Production-wise, the bathroom interior, Sheldon's bedroom, Leonard's bedroom and the connecting hallway are actually filmed on a different set than the rest of the apartment. The actual apartment set ends at a corner in the hallway immediately after the bathroom door which is for easier filming access and better view of the actors for the studio audience.

In "The Staircase Implementation", the story of how Leonard and Sheldon meet is revealed. Sheldon places an ad for a roommate after his former roommate, Sebastian, is driven to the brink of madness from Sheldon's antics. Leonard encounters Sebastian on his way to the interview with Sheldon, and he tells Leonard to run far away. Leonard is accepted by Sheldon as his new roommate and inherits Sebastian's former room, only to discover that Sebastian wrote "DIE SHELDON DIE" in red paint (like in a slasher film) on the wall.

At this time, the apartment also had significantly less furniture in the living room. Sheldon's only placement was two lawn chairs and cinder blocks as the TV stand. Even at this point in time, Sheldon's lawn chair was placed in the exact spot that he claims later on the couch. Their first major addition in furniture to the apartment was the leather couch, which Leonard buys for $100 from tenants on the first floor who were moving out; which is a great deal, since a new 4 Moroni Havana Leather Sofa retails for around $1,500. Careful watchers may recognize the style of sofa; while the boys utilize the full three-cushion sofa, defective detective Adrian Monk from the series "Monk" sports the smaller, two cushion model, of the line.

In "The Bozeman Reaction", the apartment got burglarized. Some of Sheldon and Leonard's game systems and various games were stolen. The police were also called to the apartment in "The Zarnecki Incursion", when Sheldon's World of Warcraft account was hacked.

In "The Staircase Implementation", an "apartment flag" is mentioned as a small blue flag with a coat of arms on it of a gold lion rampant on an Azure (heraldry)|field of azure on it. Flipping it upside down signifies that the apartment is in distress. In "The Roommate Transmogrification", Raj was given a lapel pin version.

From "The Escape Hatch Identification" to "The Gyroscopic Collapse", Raj set up temporary residence in Sheldon's old room.

The bathroom is the first door down the hallway off the living room.

Check out The Bathroom.

Sheldon's bedroom is located immediately after the bathroom. Sheldon usually keeps his bedroom locked, and supposedly rarely allows anyone inside, however, given the number of episodes where Leonard, Penny, his mother, Wil Wheaton, Amy, and others have been there, this appears to be more wishful thinking on Sheldon's part than actual practice. There was even the fact that Howard and Bernadette conceived their daughter in Sheldon's bedroom.

Sheldon eventually moved out, leaving his old bedroom vacant. This room was temporarily taken over by Theodore (who was hired by Sheldon to briefly stay there), Raj (until he got a new apartment), and even Sheldon (who used it for his work). With the news of Leonard and Penny expecting in the series finale, it can be safe to assume that they'll use the vacant room for their new child.

Leonard's bedroom is the last room in the hallway. There is a ledge outside that runs by both bedroom windows. Sheldon uses this ledge during "The Bozeman Reaction" to access Leonard's room because he is too paranoid to go out of his bedroom because they were burglarized earlier in the episode. When Leonard married Penny, she eventually moved into his bedroom with him.

The kitchen of the boys' apartment features an open floor plan that lets action flow easily between the living room and the kitchen space. The large butcher block type table provides a separate sitting area, allowing interactions in a setting more intimate than the clutter of the living room. The fridge and Sheldon's tea box provide "busy work" as the actors interact within the kitchen space, and it occasionally functions as an area allowing characters to briefly leave the room and re-enter quickly, allowing the characters remaining in the living room to talk or interact at their expense. For example, the guys and Penny often laugh at Sheldon's quirks when he gets up to get a drink, and Penny famously touched Sheldon's food (taking and replacing an onion ring) when he left his spot on the couch for a brief beverage errand.

For more info, check out The Kitchen

The living room serves as the focal point for the majority of the "action" of the show. This is where everyone gathers, where gaming occurs, and where Leonard attempts to have intimate dinners with Leslie Winkle and Dr. Stephanie (constantly interrupted by Sheldon). The room serves not only to showcase Sheldon and Leonard's furnishings, collectibles, and artwork, but also serves as general storage space, given the number of partially assembled computer cases and other items around the area, including a vast collection of books. 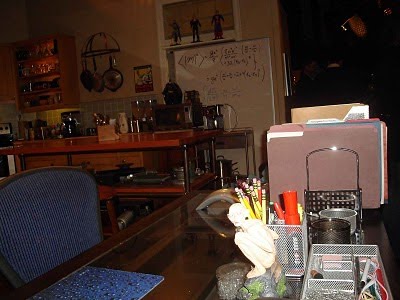 See Part 7: Shedding Light on Dark Matter of the book Unraveling the Mysteries of the Big Bang Theory by George Beahm (2011, BenBella Books, ISBN 9781936661312) for more fantasy, sci-fi, pop culture, and other items mentioned on the show in general.